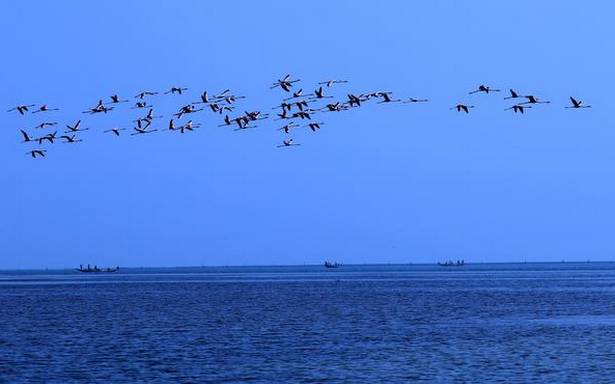 The Odisha Forest Department suspects a case of poaching

Lakhs of migratory birds fly down from other parts of the globe to Odisha’s Chilika lake, the largest wintering ground for birds in the Indian subcontinent around this time every year, but many of them end up being served on lunch and dinner plates in roadside eateries near the lake.

This is what the Odisha Forest Department suspects happened when it came across carcasses of 29 migratory birds on Saturday. However, unofficial sources put the number of carcasses at above 100.

“During regular patrolling, our staff detected carcasses of 29 migratory birds dumped at Ratamati near Badapokhria. We suspect that poachers were on their way to supply the birds to hotels. They abandoned the dead birds in a hurry on being tipped off about the movement of our patrolling teams,” said Chudamani Murmu, Forest Range Officer of Tangi.

When asked if it was case of bird flu, Ms. Murmu said the circumstances did not indicate this. “It might be a case of poaching. We have begun investigating into the case in detail,” she said.

“Despite regular awareness about birds’ protection organised by the department, some unscrupulous elements are involved in poaching. In the winter months, we intensify our patrolling by conducting raids in hotels, boats and poaching-prone pockets,” she added.

In 2020, for the third successive year, the Chilika lake hosted over a million birds, and the area around it recorded more than 12 lakh mostly migratory birds.

The lake hosts birds migrating from thousands miles away, including from the Caspian Sea, Lake Baikal, the Aral Sea, remote parts of Russia, the Kirghiz steppes of Mongolia, Central and Southeast Asia, and Ladakh and the Himalayas. The winged guests are drawn to the vast mud fields and abundant fish stock in Chilika.