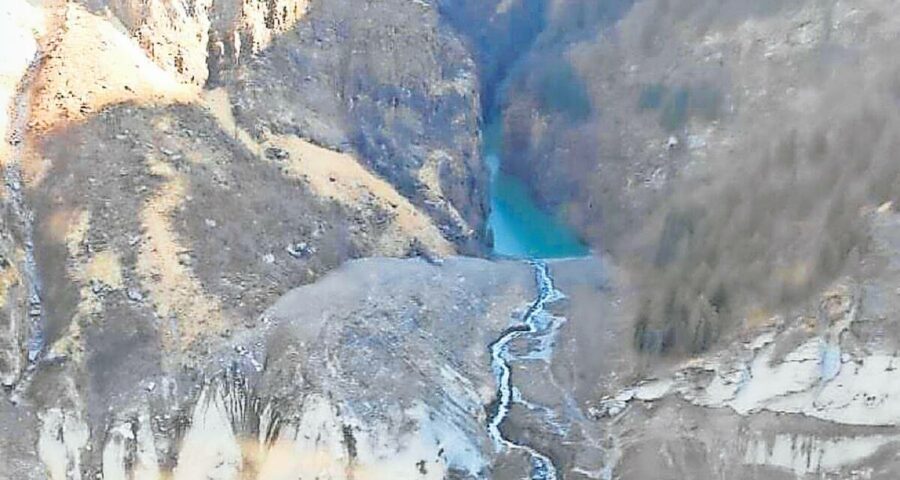 Chief Minister Trivendra Singh Rawat said: “There is need to stay alert but not to panic.” He said a watch is being kept on the lake through satellite. Debris from the landslide in Uttarakhand has blocked a stream that joins the Rishi Ganga river in Chamoli district and led to the formation of a temporary lake—a development that has left residents of the downstream Raini village on edge.

A report by the Wadia Institute of Himalayan Geology warned of further damge to the valley if the lake gets breached, but the state government said that a stream was discharging water from it, a sign that the situation is stable.

Chief Minister Trivendra Singh Rawat said: “There is need to stay alert but not to panic.” He said a watch is being kept on the lake through satellite.

Chief Secretary Om Prakash, who held a meeting on the lake situation Friday, told The Indian Express that an SDRF team was camping at the spot. “A stream of water is flowing from the lake. There is nothing like a possibile breach. Scientists of DRDO will go there tomorrow, and according to their report further steps will be taken.” A makeshift helipad has also been created there.

According to officials, the lake is at height of 3,600 metres and about 6 km upstream from Raini village where a hydro power project had been washed away by Sunday’s flash flood.

After its formation, village residents had started spending nights in the open forests, fearing a similar disaster.

According to a report by the state emergency control room, an aerial survey by ISRO scientists confirmed discharge of water from the lake formed in Raunthi Naala after a landslide.

Officials said there is forecast for snow on February 13 and 14 in the region. That would the check water flow and give experts time to develop preventive structures. Raini village pradhan Bhawan Rana said: “Villagers are on alert. If water flow will increase in the river, we will alert the authorities immediately.”

-with inputs from PTI