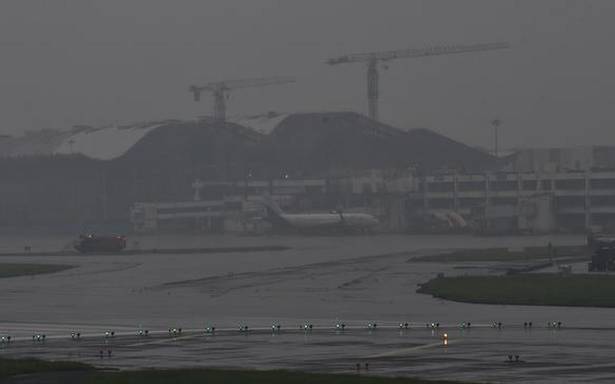 Hundreds of passengers suffered as 68 flights were cancelled, 53 were delayed

Hundreds of passengers suffered as 68 flights were cancelled, 53 flights were delayed and 14 were diverted at the Chennai airport as heavy winds and rain hit the city on Thursday. Many anxious passengers waited at the terminal, hoping for their flight to take off in the evening.

The cancellations occurred as the Airports Authority of India (AAI) decided to suspend flight arrivals between 1.15 p.m. and 6 p.m. owing to the severity of winds.

AAI officials said that during the day, the surface winds blew at a direction of 340°, hovering up to 20 knots and gusting up to 40 knots. The visibility dipped and fluctuated between 1,000 metres-1,500 metres. A team was deployed at the runway to ensure there was no waterlogging. Officials said that due to water release from the Chembarambakkam Lake, the total flow of water was 7,800 cusecs at the bridge portion of the airport.

Totally, 22 arrival flights and 28 flights bound for Delhi, Madurai, Kolkata, Mumbai, Hyderabad, Bengaluru, Thoothukudi, Visakhapatnam, Pune and Ahmedabad were cancelled in the afternoon. Seven international flights to and from Dubai and Sharjah were also cancelled. Furthermore, 14 flights coming to Chennai from cities like Kolkata, Delhi, Bengaluru, Tiruchi and Madurai had to be diverted to either Bengaluru or Hyderabad.

In the morning, the flights managed to arrive in the city. But after 11.30 p.m., as the wind speed increased, flights had to hover over the city for a while before landing. “Subsequently, we held a meeting and did an inspection of the operational area. After getting a weather update, we decided to cancel the flights to safeguard passengers as the wind speed increased,” a source said.

The Twitter handle of the Chennai airport said, “Due to severe rain and heavy cross winds, arrivals at #AAI Chennai Airport will remain suspended from 1315 hrs to 1800 hrs today [Thursday]. Departures will continue. The decision has been taken considering the safety aspect of passengers and severity of wind @AAI_Official.”

A task force was formed on Wednesday to manage the operations with a detailed contingency plan. Everything was planned, from stocking up on food at outlets in the terminals to coordinating with airlines for guiding passengers in case of delays and cancellations, officials said. A help-desk was also opened.