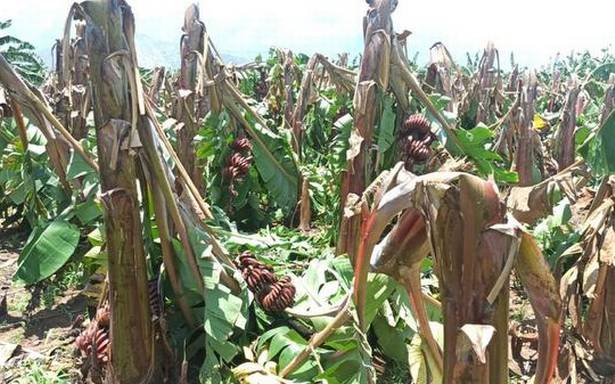 The heavy rain that lashed various parts of Theni district in the past few days destroyed 15,000 acres of banana plantations at Angurpalayam near Cumbum in Theni district

The unexpected rain since Thursday has doomed the prospects of farmers, most of whom had borrowed heaviloy to raise the crop. One of the farmers, Marimuthu, said he had taken loan from money lenders since a buyer had assured them that he would procure his produce for export.

Banana plantations were affected in many other places such as Gudalur, Uthamapalayam, Kombai and Thevaram.

In the wake of the heavy rain, there were flash floods near Gudalur due to which five-feet-high sand deposits on Suranganaru blocked water flow to Ottankulam village.

Farmers in Mela Gudalur said only the PWD could remove the deposit using JCB and other heavy equipment and remove the blockage. The farmers have submitted a petition to the PWD and Agriculture Department officials to set things right soon as standing crops required water for irrigation.