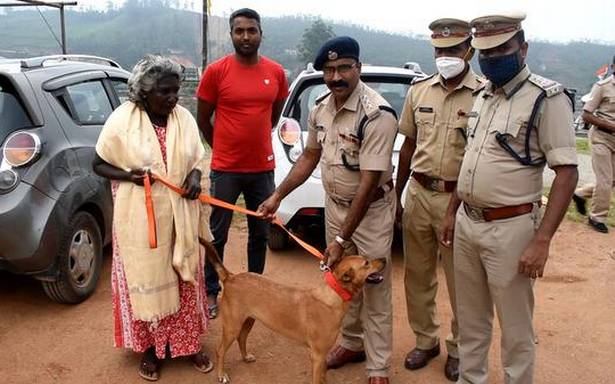 A dog squad team of the Idukki police bid adieu to Kuvi, a pet dog adopted by it after being rescued from landslip-hit Pettimudy, on Friday. It was handed over to a relative of its owner at Pettimudy.

Kuvi was instrumental in finding its master’s body from the debris after a landslip buried three estate lanes (workers’ quarters) at Pettimudy, near Munnar, on August 7 last year. The dog was adopted by the district police dog squad and given training for eight months.

The body of little Dhanushka was recovered from the debris four days after the tragedy when Kuvi started barking at a spot and drew the attention of the rescue team. The body had been washed four km away from the accident site.

The incident gained attention and a dog squad trainer wanted it to be adopted as the family, except the grandmother of the child, could not be traced after the tragedy, which claimed 70 lives.

It was the decision of the State Police Chief to make it a member of the dog squad. Kuvi was adopted by the squad and was given training in obedience, sniffing and tracking, heel walk, and other routine exercises. The native dog was not far behind the other dog breeds in the squad, said a dog squad trainer.

However, it is said that the kin of the family to which the dog belonged made an appeal to the police and wanted it back. The silent transfer of Kuvi was held amid questions on its future care.

Dog squad trainers said a local dog, when adopted into the dog squad, needed more time to get trained. However, they were behind none in sniffing, tracking, and obeying commands. Local dogs Asha, adopted by the Kolkata police, and Tenka, adopted by the Uttarakhand police, had proved their efficiency in sniffing and tracking explosives.