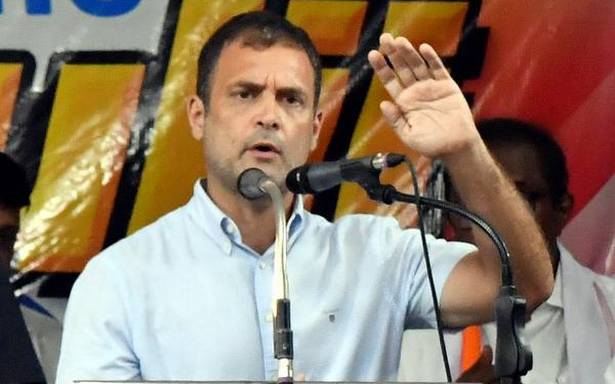 Former Congress president Rahul Gandhi on Wednesday asked Prime Minister Narendra Modi to be transparent about the foreign aid received to fight pandemic and demanded answers from the government.

“Questions about COVID foreign aid: What all supplies has India received? Where are they? Who is benefiting from them? How are they allocated to States? Why no transparency? Any answers, GOI,” he asked in a tweet.

Mr. Gandhi also tweeted a short video clip of a Gurugram hospital where six patients were found dead after doctors abandoned them because of oxygen shortage. “This is murder. And cover up! My condolences to the families of the victim,” he said and tagged several other news reports from across the country about patients dying from lack of oxygen.

Amidst reports that the relief material including critical medical supplies had been lying in Delhi airport as the Centre had been slow in preparing standard operating procedures, the Congress has been pressing the government to make details public about how much aid has been received and how it has been used.

“1. @MoHFW_INDIA must inform nation what criterion is being used to distribute foreign aid? 2. How much has been donated/gifted by which nation? 3 . Which State & institutions has it gone too? 4. Who has taken the decisions with regards to it’s allocation? 5. Dashboard Required,” tweeted Lok Sabha member Manish Tewari.

His Lok Sabha colleague, Shashi Tharoor, joined in by tweeting that these are precisely the questions that international media is asking of the Indian government.

Tagging a special report on the collapse of healthcare in a government hospital in Uttar Pradesh because of the rush of patients and shortage of oxygen, former Finance Minister P. Chidambaram asked on twitter, “Will @drharshvardhan and @DrSJaishankar please watch this video telecast by CNN? This is what the rest of the world sees everyday. Do the two Ministers still deny there is acute shortage of oxygen and people are dying in hospitals for lack of oxygen?”

“If the hearts of the two Ministers do not grieve after seeing these visuals, we will know what those hearts are made of,” he said.

Earlier, Mr. Gandhi had tweeted that the Modi government has been a “complete failure” in handling the pandemic, vaccination and employment to people.

“Neither vaccine, nor employment. People are facing the brunt of coronavirus. The Modi government has completely failed,” he said, citing a media report that mentioned the Centre for Monitoring Indian Economy (CMIE) claiming about 75 lakh job losses in April alone and unemployment rate touching the 8%-mark.