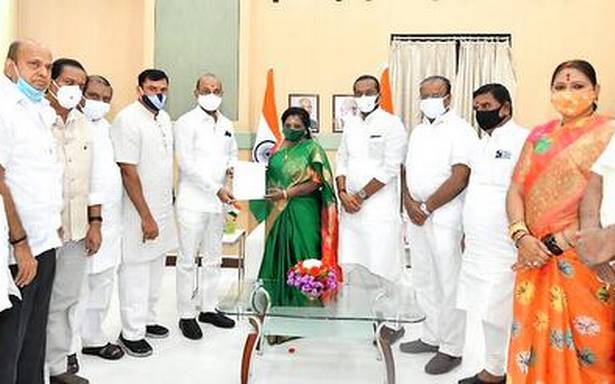 Telangana BJP accused a ‘busy’ Chief Minister K. Chandrasekhar Rao of being ‘adamant’ and not listening to the ‘travails of the government employees’ as a result of the ‘arbitrary’ zonal transfers policy on Friday. "Every employee has been affected due to this lopsided policy. There are protests everywhere and the media has been highlighting the issue but Mr. Rao seems to be oblivious to all these instead of making due corrections," said party president and MP Bandi Sanjay Kumar on Friday.

He was talking to the media outside the Raj Bhavan after meeting Governor Tamilisai Soundararajan requesting her intervention to make the Government make necessary changes to the GO 317 – which led to the controversial transfers policy. "Mr. Rao is sitting in the CM chair due to the protests taken up by the government employees during the separate state agitation but now, he does not even have the time or inclination and talk to them to find an amicable solution when some of them are even resorting to extreme acts," said the BJP leader.

The BJP supports the employees’ concerns about the zonal transfers policy where only the CM, Ministers and MLAs have the discretionary powers and no options to them. The Government does not even have a proper seniority list and there is a deliberate effort to dry a wedge between the staff, he charged. "We are requesting the employees to fight for their cause and don’t lose hope, we are with you and will force the government to back down," he said.

In the memorandum, the party said the GO was in violation of the Presidential orders and the spirit of Telangana movement as it renders both the employees and the teachers non-local in the districts of their posting. With seniority the sole criterion for the exercise of options by the employees, the juniors are being transferred to the remote areas in districts, non-local to their native places while the seniors are opting for urban districts.

It also means, there won’t be any vacancies for the next 30 years in rural areas and when seniors retire, the vacancies will go to the people of the respective urban districts, depriving educated youth of the rural areas of employment opportunities, it claimed. Hence, the Governor was urged to instruct the government to put the transfers orders on hold, advise the government to hold a comprehensive dialogue with the employees unions to evolve rational and just guidelines for transfers based on nativity.

Any imbalances in the allocation could be tackled by creating supernumerary positions wherever necessary. A transparent counselling method for the proposed transfers of teachers, allow them to exercise their options and a column for BCs, SCs and STs as mandated by the statute is necessary. Expeditious steps to fill the 1.92 lakh vacancies within a stipulated time frame was the need of the hour, the memorandum added. Senior leaders N. Indrasena Reddy, T. Raja Singh and others were present.