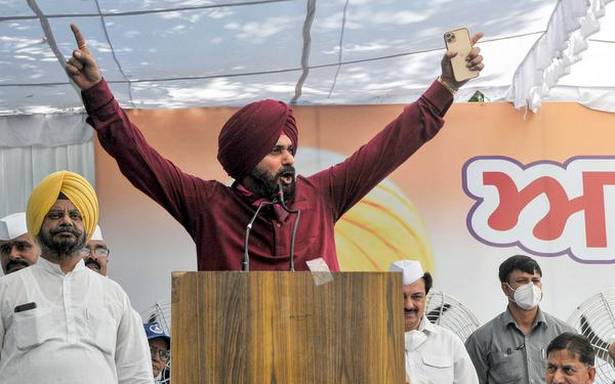 They urged the Congress national leadership to direct Mr. Sidhu to immediately rein in his aides in the interest of the party

Taking exception to the “anti-national” and “pro-Pakistan” comments of two of the Punjab Congress chief Navjot Singh Sidhu’s aides, Malwinder Mali and Payre Lal Garg, a group of Punjab Congress Ministers and MLAs on Tuesday called for strong action under the law against them.

Besides stringent legal action against Mr. Mali and Mr. Garg, they also urged the Congress national leadership to direct Mr. Sidhu to immediately rein in his aides in the interest of the party as well as the country. “The Congress has made many sacrifices for the protection of the nation’s security and peace, as have our soldiers at the borders. Nobody can or should be allowed to undermine these sacrifices and jeopardise the safety of our country and its people,” they emphasised, citing, in particular, the grave implications such statements could have for the border State of Punjab.

The Congress leaders also questioned Mr. Sidhu’s failure to put his foot down on the diatribe by his close aides, despite the “justified uproar it has triggered across party lines”. Mr. Sidhu’s omission in this regard had given ammunition to Opposition parties, which were quick to recall the Punjab Pradesh Congress Committee’s chief’s personal bonhomie with the Pakistan Prime Minister and Army chief, they pointed out, warning against the “massive damage this could cause to the Congress in the run-up to the 2022 Punjab Assembly polls”, which are due in less than six months.

The four Punjab Congress leaders termed Mr. Mali’s statement on Kashmir as “a dangerous and unacceptable deviation from India’s stated position on J&K”. By questioning the unanimous 1994 resolution of the Parliament of India declaring Jammu & Kashmir as an integral of India (which was reiterated in 2012), Mr. Mali had blatantly toed the line of Pakistan, which had been trying to stake a claim to the region and was illegally occupying certain areas, such as Pakistan occupied Kashmir (PoK), they added.

Even Mr. Garg’s statement countering Chief Minister Captain (Retd.) Amarinder Singh’s criticism of Pakistan reflected strong pro-Pakistan leanings, they further said, adding that anyone not condemning the continuous efforts from across the border to destabilise Punjab and India was playing into the hands of the enemy. “Drones from Pakistan are dumping arms and drugs into Punjab almost every day. Our soldiers are dying at the border. How can any patriotic Indian not condemn Pakistan’s actions in the circumstances?” they asked.

Such comments, if not punished, had the potential of becoming “a deadly precursor to more anti-national statements, promoted by forces inimical to the interests of India”, they warned, citing the continuous threat from across the border to India’s peace and integrity.