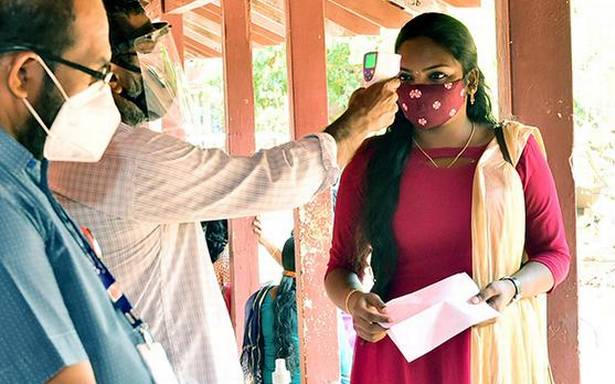 The Kerala Public Service Commission (PSC) on Sunday organised the second phase of examinations for posts with higher secondary as the minimum qualification.

Across the State, more than 2.25 lakh aspirants appeared for the examination in around 1,100 examination centres. All the districts, except Kasaragod, had centres for Sunday’s examination. This first phase of the examination was held last week.

With the sudden spike in COVID-19 cases in Kerala over the past few days, many universities have been postponing their exams. The PSC has not taken a call on postponing any of its upcoming examinations. According to PSC officials, the matter could come up for discussion in the Commission’s meeting to be held on Monday.

“All the upcoming examinations in the near future are smaller examinations with fewer applicants. The next big examination will be the one for graduate-level posts to be held in the latter half of next month,” said an official.

The PSC had officially conveyed two days ago that all examinations for various posts scheduled to be held from April 18 to 30 will be held as per schedule. However, the departmental-level examinations scheduled till April 22 have been postponed.