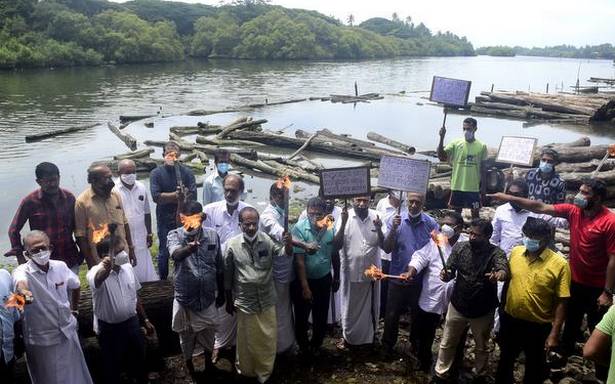 A torch light protest was held on World River Day on Sunday seeking rejuvenation of the Kallai river.

The Kallai River Protection Committee, which organised the event, claimed that ₹4.9 crore had been allocated from the River Management Fund 12 years ago and the Kozhikode Corporation had granted ₹7 crore for the revival of the river. However, the authorities were yet to take up any constructive work, they claimed.

The Revenue Department had identified 23.5 acres on the banks of the river as being encroached upon by private persons. Markers were placed along a 4-km length to notify that it is government land. The committee functionaries demanded that steps be taken to stop the attempts by some people to encroach upon the land again. They also sought constitution of special squads to nab people who are trying to dump waste in the river. Committee president S.K. Kunjimon and Kozhikode Corporation councillor K. Moideen Koya were present.