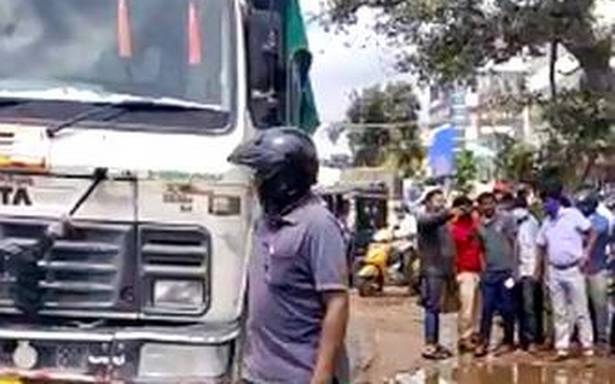 Second accident in less than three days on the same road

A teenager was mowed down by a truck after she fell off the scooter she was riding pillion on when the rider swerved to avoid a large pothole on the road. The tragic accident took place on the outskirts of the city on Magadi Road on Friday morning.

Nubiya, 17, was returning to her home in Goripalya from Tavarekere with two relatives – Ahran, 21, who was riding the scooter and her younger sister Afreen, 15, when the accident occurred. They were riding triple.

They were near Chikkagollarahatti, where the width of Magadi Road reduces to only 16 feet, and so Ahran is likely to have taken a sudden sharp right turn to avoid a pothole.

The rear-end of the scooter touched a lorry behind them causing Ahran to lose his balance. All three fell off the scooter. Ahran and Afreen fell to their left, while Nubiya fell to her right and came under the wheels of the lorry. She died on the spot.

This is the second accident in less than three days on the same road as the result of motorists trying to avoid potholes. On October 6, Wednesday night, Krishnappa, 57, a sub-inspector with Excise Department was killed in an accident when he tried to navigate a pothole, and came under the wheels of a lorry.

“That stretch of road is already very narrow but sees a heavy volume of traffic every day. A project to widen the stretch into a four lane highway has been pending for a long time now,” said Jagadeesh, Dy.SP, Nelamnagala.

The condition of the road is a safety hazard, with potholes full of water due to the recent spate of rains. “In both accidents, the two-wheeler riders were either trying to avoid or navigate a pothole,” said Mr. Jagadeesh.

The Madanayakanahalli police have now registered a case under Section 304A of IPC for death due to negligence against the lorry driver, concerned officials of Public Works Department and Machohalli Gram Panchayat.