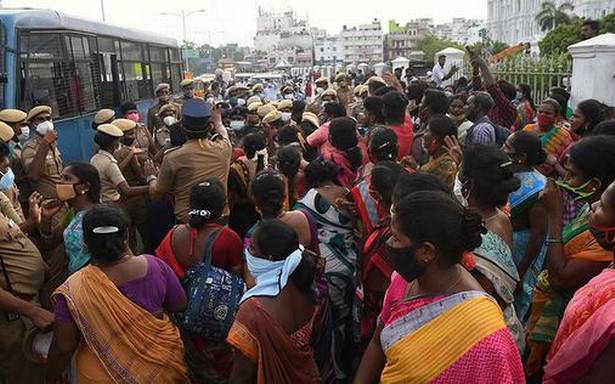 Four of them have been admitted to hospital

Four women conservancy workers, earlier employed by the Greater Chennai Corporation, were shifted to a hospital after they were manhandled by police personnel on Thursday. They were among the several workers who were protesting against job loss.

Around 4.30 p.m., they gathered near the Ripon Buildings and were asking officials to permit them to explain their problems to any representative of the Chief Minister. They said they were relying on the promise made by the DMK leader before the election.

A group of more than 50 police personnel, led by a young IPS officer, were trying to prevent the workers from blocking traffic on E.V.R. Periyar Salai. When the protesters insisted on meeting officials, the police officers, including a sub-inspector, were found manhandling them. One sub-inspector was holding a woman by her wrist and pulling her. He tried to hide his name badge after mediapersons arrived at the site. Women police personnel were also seen roughing up the workers.

As the protesters were unrelenting, the police cleared the traffic only after hitting, kicking and punching a few workers, who lost their jobs in January because of privatisation by the Greater Chennai Corporation.

After photographers and videographers from various media houses arrived, the police changed their behaviour and requested the workers to disperse.

According to sources, conservancy workers had been mobilised by union leaders affiliated to various parties. “We were without jobs for more than seven months. We worked during the first wave of the pandemic and collected garbage from homes, risking our lives. Many women who lost jobs are widows. We had been working for around 10 years under the National Urban Livelihoods Mission. We request the Chief Minster to intervene and solve our problems,” said a worker.