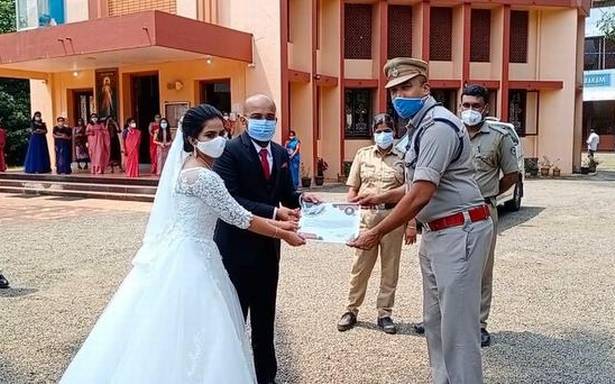 Over 40 appreciation certificates presented to newly married in Kozhikode

At a time when the police are facing bouquets and brickbats for stringent enforcement of the COVID-19 protocol, here is a team of officers in the Kozhikode rural area who are keen to knock at the doors of citizens with colourful bouquets and appreciation certificates for a special reason.

In a unique move, the police are on the ‘lookout’ for couples who religiously follow the safety guidelines during their weddings and make their happiest moments the safest experience for all invitees.

“We have so far distributed around 40 appreciation certificates to the newly married within the Kozhikode Rural police district. The couples were all very excited, as we could plan it as surprise gifts for them acknowledging their cooperation during the pandemic times,” District Police Chief A. Sreenivas told The Hindu on Wednesday. He said he would personally call on such couples on possible occasions or otherwise delegate his colleagues to hand over the certificates.

Following the creative move of the khaki-clad, many families in the Kozhikode rural area have been strictly complying with the safety guidelines and following the principle of minimalism. The number of visitors to weddings or similar family events has seen a considerable drop. Since the initiative was launched as part of an intensive awareness programme, it was well received by the public. Also, it paved the way for many families to share some cordial moments with police officials.

“For better planning, we make a list of all weddings in our area in advance from the COVID Jagratha portal or through Special Branch reports. Later, our team comprising sectoral magistrates and police officials visit the spots to confirm that the families are properly complying with rules and following physical distancing norms,” said Dr. Sreenivas. He added that similar creative interventions would be made in the days to come.

‘Kuttikkaval’ (Child Watch) was another innovative idea launched by the Kozhikode Rural police recently to make children aware of the pandemic and their humble roles to fight off the crisis in their own families. Awareness messages meant for the young audience were widely circulated through various social media applications. Apart from the social media campaign, they were given exclusive opportunities to participate in various online competitions such as video making, posters, and trolls to create awareness. The best were promised attractive gifts.