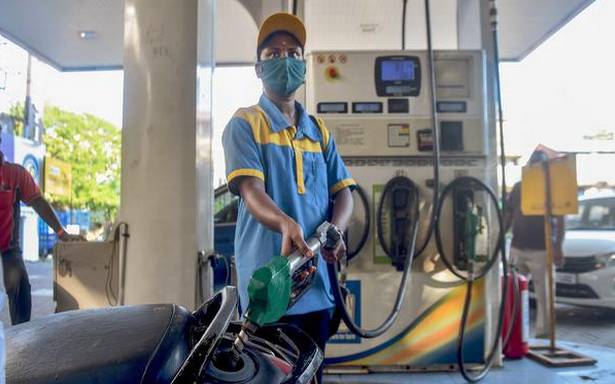 Since May 4, petrol price has been hiked on 40 occasions while diesel rates have gone up 37 times and have been reduced on one occasion.

Petrol price on Thursday was hiked by 35 paise per litre and diesel by 15 paise, pushing rates to a new high across the country.

Petrol in Delhi now costs ₹101.54 a litre and diesel ₹89.87 per litre, according to a price notification of state-owned fuel retailers.

The increase comes after rates stayed mute for three days. Petrol price was last hiked on July 12, on a day when diesel rates had seen its first reduction in almost three months.

The increase on Thursday neutralised the 16 paise price cut in diesel on July 12. Prior to that, petrol and diesel prices were last cut on April 15.

Thereafter, rate revision took an 18-day pause, coinciding with the peak of electioneering to elect a new government in states like West Bengal.

The revision cycle started soon after results for the State elections were declared. Since May 4, petrol price has been hiked on 40 occasions while diesel rates have gone up 37 times and have been reduced on one occasion.

Domestic fuel rates are benchmarked to international oil prices as India is 85% dependent on imports to meet its oil needs. International rates have surged since last month on a rebound in consumption.

The relentless price increase has pushed petrol rates above the Rs 100-a-litre mark in most places in 15 States including Rajasthan, Madhya Pradesh, Maharashtra, Andhra Pradesh, Telangana, Karnataka, Odisha, Tamil Nadu, Kerala, Bihar and Punjab and at a couple of districts in Uttar Pradesh and Haryana.

Rates are also above the sensitive ₹100 per litre level in four Union Territories including Delhi, Jammu and Kashmir and Ladakh.

Diesel, the most used fuel in the country, is above that level in some places in Rajasthan, Odisha and Madhya Pradesh.

Fuel prices differ from State to State depending on the incidence of local taxes such as value-added tax (VAT) and freight charges.

Since taking over as the new oil minister last week, Hardeep Singh Puri has been courting oil-producing nations to convey India’s concern over high prices. He spoke to his counterpart in Qatar on July 10, and on Wednesday dialled the UAE Energy Minister.

“Conveyed my desire to work closely with UAE and other friendly countries to bring a sense of calm, predictability and realism among other suppliers in the energy market to make it more affordable for consumers,” Mr. Puri tweeted after speaking to the UAE Minister Sultan Ahmed Al Jaber.

In 40 hikes since May 4, the price of petrol has risen by ₹11.14 per litre. During this period, diesel rates have soared by ₹9.14 a litre in 37 instances of price rise.

Since May last year, petrol price has jumped by ₹31.95 a litre and diesel by ₹27.58. The government last year raised excise duty on the two fuels to recoup gains arising from a slump in international oil prices.

As much as 55% of the retail selling price of petrol in Delhi is made up of taxes (₹32.90 a litre excise duty collected by the central government and ₹22.80 VAT levied by the State government).