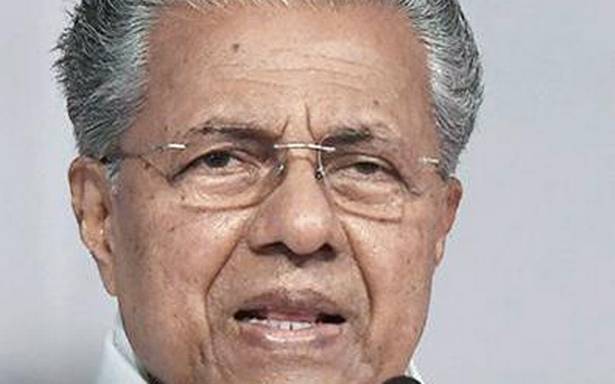 A meeting of the Kerala Cabinet here on Thursday is likely to consider whether the COVID-19 situation in Kerala permitted further relaxation of constraints on various languishing sectors, primarily retail, tourism and film and television production.

Any rejig in regulations is likely only later and in consultation with the COVID-19 expert committee.

An official said the government was worried that the average test positivity rate (TPR) was hovering over 10% almost unrelentingly for weeks. The infection transmission rate remained high. Public health experts have warned the government that the second wave was yet to abate. There were cautionary reports that a third wave, driven by highly virulent variants of the coronavirus, might knock at the doors of Kerala. Epidemiologists are viewing the impending Muharram-Onam shopping season with concern, he said.

Nevertheless, the government had to balance protecting life and preserving livelihood. Chief Minister Pinarayi Vijayan is due to hold talks on Friday with shop owners who had threatened to rebel against the COVID-19 regulations on retail.

Meanwhile, textile shop owners have moved the Kerala High Court seeking an order allowing to open showrooms on all days. Jewellery shop owners are expected to do the same.

The government is also under pressure from various religious groups, including the Samastha Kerala Jamiat-ul-Ulema, to permit more persons into places of worship. Samastha workers staged sit-in protests in front of District Collectorates here on Thursday to press their demand.

The government will also consider the local film industry’s demand to allow shoot on big sets and outdoor localities. At least seven production companies have moved their projects out of Kerala to Telangana and Andhra Pradesh to circumvent the pandemic regulations on filming.

Culture Minister Saji Cherian told reporters that the government was constrained to impose certain limitations on the entertainment industry to contain the COVID-19 spread. The government is not inimical to the industry. However, insulating the people from the worst ravages of the disease is the administration’s priority. “Let the TPR come down. We will further ease restrictions then,” he said.

The Zika virus outbreak is also reportedly on the agenda of the Cabinet. The government will also review the current scale of COVID-19 testing and vaccination.

Mr. Vijayan is expected to brief the Cabinet about his interaction with Prime Minister Narendra Modi and other Union Ministers.

Mr. Vijayan had sought Central support to expedite the SilverLine semi-high speed railway project. He pointed out to Mr. Modi that Kerala had submitted a detailed project report to the Union Finance and Railway Ministry. It had also given the nod for land acquisition for the scheme.

An official said Mr. Vijayan’s meeting with Union Minister for Transport and Highways Nitin Gadkari yielded some results. For one, the Kannur-Mysore stretch will be developed as a national highway linked to the Bharathmala project.

The government has also got sanction to go ahead with the 80-km Thiruvananthapuram-Vizhinjam ring road. The ₹4,500-crore proposal will open up hinterlands of the capital district from Paripally to Vizhinjam for development.

Meanwhile, the Congress-led United Democratic Front (UDF) Opposition stepped up pressure on the government to ease COVID-19 regulations on retail.

Leader of the Opposition V.D. Satheesan said the government’s current pandemic regulations were stifling and unscientific. They were a far cry from the free-for-all climate that prevailed in the run-up to the 2021 Assembly polls. Mr. Satheesan said traders were at their wits’ end. The government should consider their plea with empathy. He asked the government to convene the State Level Banking Committee to declare a six-month moratorium on recovering debts.