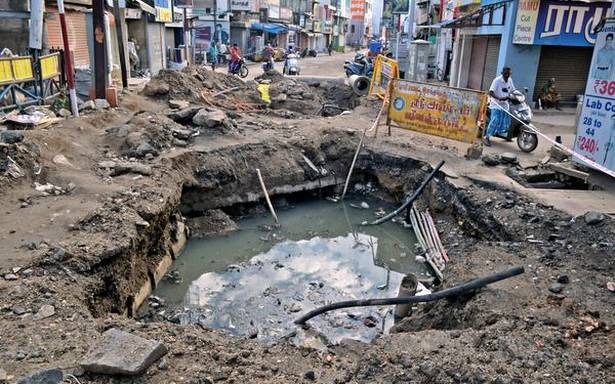 With delay in completing the underground sewerage scheme (UGSS) works at the Manikoondu area affecting motorists, pedestrians and traders, the public urged the Corporation to expedite and complete the works at the earliest.

Manikoondu area is one of the busiest areas in the city as textile showrooms and shops, grocery stores and other commercial establishments are present in large numbers. Also, vehicles from Pallipalayam pass through R.K.V. Road to reach Panneerselvam Park junction. Hence, the roads are busy round the clock. After the Corporation-appointed contractor began work in the area recently, traffic was diverted. However, motorists and traders said works were being carried out at a slow pace. “Besides covering additional distance to reach the destination, traffic congestion on narrow streets is a major issue,” said P. Madhan Kumar of Kumalankuttai.

Traders and vendors also said their business was affected for over a week as works were yet to be completed. “We see little business as the road is closed for the work,” said a trader in the locality. “A pit was dug making it difficult for pedestrians to even cross the road,” said V. Kamalam of Kallukadaimedu.

When contacted, Corporation Commissioner M. Elangovan told The Hindu all the utilities, water pipeline, drainage channel, electric cables and telephone cables were present in the area and works had to be executed with precaution. Also, digging rocks in the area took time, he added. He said works were expedited and the contractor was expected to complete the works in a week.