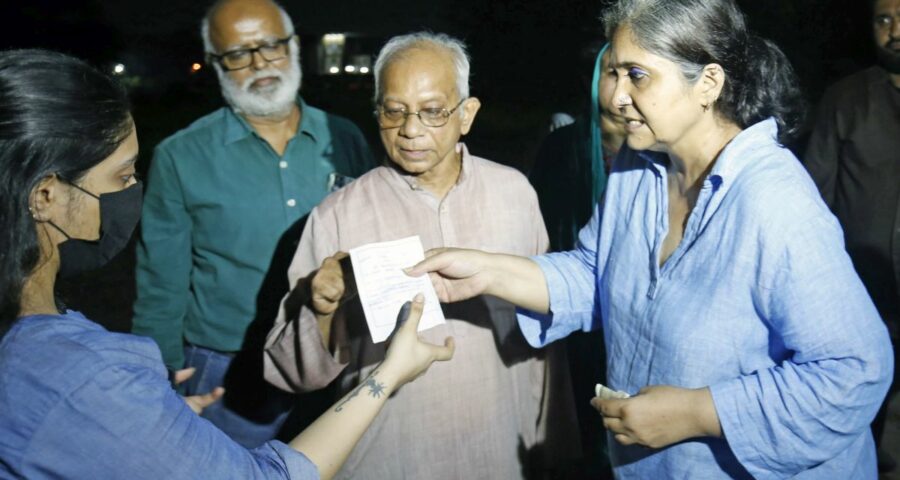 ‘We are losing the battle of secularism, but we have not lost.’

‘Mussalman ke do hi sthaan, Pakistan ya Kabristan (Only two places for Muslims — Pakistan or graveyard).’

This was the kind of slogans Syed Firdaus Ashraf heard during the December 1992-January 1993 riots in Mumbai.

It was during those times as a young graduate that Firdaus first met Teesta Setalvad at a meeting of the late M N Roy’s Humanist organisation.

There she was highlighting the dangers of the future by pointing out how the secular fabric of Mumbai city was being systematically ripped apart by communal forces and one must stand and speak up before it was too late.

Thirty years later, Firdaus realised how right Teesta was when he went to buy a property.

One real estate broker told him, “As a Muslim you will get property only in Bandra West (north west Mumbai). It is only there that secularism is practised in Mumbai. If you cannot pay that money, better stay in a Muslim ghetto.”

When Firdaus looks back, he realises that Teesta was right in predicting Mumbai’s future.

And for this fight for secularism she was sent to prison for 63 days.

Setalvad, who is the secretary of the NGO Citizens for Justice and Peace, is accused of ‘conspiring to fabricate facts and documents, tutor witnesses and abused the process of law by fabricating false evidence to frame people in the 2002 Gujarat riots’.

A three-judge Supreme Court bench, headed by the now retired Justice A M Khanwilkar, while upholding the Special Investigation Team’s clean chit to then Gujarat chief minister Narendra Modi in the 2002 Gujarat riots case, said Setalvad, a co-petitioner in the case, had exploited the emotions of Zakia Jafri, whose husband former Congress MP Ahsan Jafri was killed with scores of others by rioters in the Gulberg society in Ahmedabad on February 28, 2002.

‘Antecedents of Teesta Setalvad need to be reckoned with and also because she has been vindictively persecuting this lies for her ulterior design by exploiting the emotions and sentiments of Zakia Jafri, the real victim of the circumstances,’ the judges said.

The following day, Teesta was arrested by the Gujarat police.

In the last 30 years, whenever Firdaus passed the bungalow in Juhu, north west Mumbai, where Teesta lives — her grandfather M C Setalvad was independent India’s first attorney general; her great grandfather Sir Chimanlal Setalvad was a distinguished lawyer in his time; her father Atul Setalvad was a well-known lawyer — he always wondered why Teesta, who was brought up in affluent and genteel surroundings, decided to speak up for the downtrodden and Muslim riot victims.

Why choose harassment by the State and now prison for one’s activism over the material comforts of life?

But then life is all about choices. The choices one makes. And Teesta made her choices young and has stuck by them come what may.

A couple of days ago, Firdaus finally got a chance after 30 years to ask her this question: What makes Teesta Teesta?

How did you move from journalism to activism?

The period of the 1992-1993 riots and prior to that, from 1986 onwards, is what actually transformed Javed (her husband Javed Anand, a senior journalist and editor) and me from mainstream journalists to journalist-activist-campaigners.

In August 1993, we started the Communalism Combat magazine. It was the period when we saw our city getting burned by the fires of hatred which were perpetrated systematically. And this happened without the Internet and social media.

As I often say, what happens on the streets happens last, but the process begins from homes, to living rooms to class rooms where you can see the division.

We were late in recognising that division when the city burned.

Where were you on the day the Babri Masjid was demolished, December 6, 1992?

I went all over Mumbai city. I went to Pydhonie (south Mumbai), Dharavi (north central Mumbai) and I saw with my own eyes that the first act on the street was not from the Muslim protestors as it was made out by some sections of the media.

The first process began after the victory procession post the demolition of December 6, 1992, by right wing Hindu organisations. It was ghatanand ceremony celebrating what they wanted to achieve, they achieved.

And it is important for the young people of India to understand what did they achieve.

Was it the achievement of demolition of a 450-year-old mosque?

Was it an attack on the Constitution of India?

Was it showing minorities their second class citizenship place?

Was it justifying the othering and violence?

And side by side we also had the Shah Bano case which was also frightening. We saw minority mobilisation of the male clergy.

Javed and I saw this as a replay of Partition. Our city burned and then the behaviour of the police at that time…

I recall in that meeting of 1993 you had played some police tapes which were horrendous and against the Muslim community. How did you get them?

People, however, started talking about how certain sections of the police had got affected by politics and failed to do their duty.

At that time I was a field reporter and with Business India. I covered the Radhabai Chawl attacks (where six Hindus were burnt including a disabled girl) which were horrific and one day before that at Antop Hill, there was a Muslim family that was burnt in a Maruti van.

And therefore, to say that one thing (the Radhabai Chawl incident) triggered is wrong as it is a cycle of violence which begins with the politics of hatred.

Who cast the first stone is an argument that you can’t win when hate speech and writing have triggered violence in the mind weeks and months before.

At that time, I came to know that on the police wireless there were some interjections that were extra-constitutional, that were provocative and abusive against the Muslim community.

This was a surprise. I couldn’t believe it then. And I felt if it was really true, then we must document it because technology was not very advanced then. We then managed to record 17 recordings through HAM frequency during the 1993 bout of violence.

It was very revelatory because, (for example) while relief was being sent to certain areas, a section of the police was trying to divert the relief from reaching hapless (Muslim) areas craving for assistance.

The police were also using abusive language towards Muslims where they can be heard saying in Marathi that Muslims deserve to die, they do not deserve to get milk and food, etc.

By fighting for the cause of secularism, did you lose friends? What is the price that one has to pay? What price has Teesta Setalvad paid for fighting the injustice done to Muslims?

The price is heavy, but I am the kind of person who looks always at the glass that is half full!

And I say well, 172 convictions of which 124 (sentenced) to life imprisonment in the first round. When during bouts of targeted violence has this kind of substantive justice accrued?

I say the question is whether the glass is half empty or half full. It is not that people want to avoid you or you are treated like an untouchable. But yes, invitations get less and institutions don’t invite you.

All these things happened after 2014, but I do not look at it this way as I look at the way people who stood by me after 2014. For me, this is an empowering thought.

When I was in jail — 63 days in jail and seven days in remand — I am telling you it is a terrible place to be.

What gave me immense strength is that I got 3,500 postcards and letters. These were handwritten letters. Adivasi organisations and Mahila organisations wrote to me and so did a former colleague at the Indian Express who is now in Birmingham (in the United Kingdom).

There were many who wrote poetry to me and many who stood by me as they have known me from my childhood.

But do you feel that you have lost the battle for secularism?

We are losing the battle of secularism, but we have not lost.

There is a lot to regain if we learn how we need to fight back because I really feel that people of this country are not hardcore communal at all. But they are being bombarded by polarising messages.

The greatest abdication is by the media. I don’t call them mainstream media, I call them commercial media. The media is selling their headlines, TRPs and dishing out propaganda, vicious, unverified right wing propaganda.

If this government didn’t have media, then I don’t think they would have won the elections.

This book on your table, Kosovo by Tim Judah, is a very scary book to read as it’s about what happened in the former Yugoslavia in the 1990s. Do you think something like this can happen in India?

I can understand this sense of dread because you are from the minority community. Things are scary as you have seen repeated bouts of physical violence and targeting, verbal slurs and othering — apart from the early 1990s, 1992-1993 Mumbai when your family was targeted, Gujarat 2002…

Now seewhat has happened in the Delhi riots during the anti-Citizenship (Amendment) Act and National Registry for Citizenship protest. Who were targeted? Who are the young Muslims in jail?

We are certainly on a precipice, but is all lost?

When I speak and work among Indians where there is not hatred but sharing and camaraderie, I still have hope.

It is not easy and we cannot take it lightly. But I think we need to pull up our socks and fight back. We need to do some grassroot level mobilisation as citizens.

I am not talking about political formations and Opposition parties because that is another story. What can we do as citizens?

Those of us who believe in a pluralistic ethos and believe in India being a story of different cultures, and that is the beauty of this country.

You mean India like a beautiful guldasta (flower vase) of different flowers?

We had communal conflicts before, and nobody is denying that. But what is the dominant reality we need to communicate to the people of this country? We have to get to the traditional grassroot mobilisation which we have stopped doing.

We need to discuss controversial issues. We need to have debate by respecting people’s view by slowly chipping away at the hatred.

There are enough people who are worried about the future and scared of what is happening. Instead of deciding to emigrate and go away, I think we need to dig in our heels and say let us do it in our bastis and do it in our neighbourhoods.

Did you come across this statement that if Teesta can be arrested so can anyone be arrested for preaching secularism?

Today I was talking to an activist friend of mine from Gujarat. He told me that since I went to jail, he was trying to reassure people and ordinary Muslims from Gujarat who are associated with us for the last 20 years. They were worried because they feel that if Teesta can be arrested, they will be next.

And this is what the government wants. They want to perpetuate a perennial climate of dread and fear so that we are not ourselves. We are not confident citizens rooted in the soil who can speak back and ask questions.

This government is elected by the people and it is answerable to the people. We are a democracy. They cannot say that we cannot ask questions.

If we cannot, then we have to ask ourselves if we have become too meek and too mild.