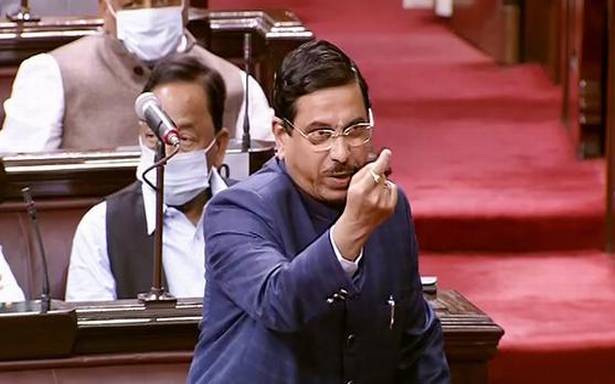 The political slugfest over the suspension of 12 opposition MPs continues even after the conclusion of the winter session of Parliament with Union Minister Pralhad Joshi and Congress chief whip in Rajya Sabha Jairam Ramesh exchanging barbs on Sunday over the issue.

In a series of tweets, Mr. Joshi posted a video of the ruckus created during the last days of the Monsoon Session that led to the suspension of 12 MPs and tagging Mr. Ramesh said, "As people’s representatives, it is the duty of parliamentarians to respect the Chair and behave in a manner worthy of their standing." However, Mr. Ramesh’s colleagues chose disruption over debate, he sais. "It was unfortunate as the whole country witnessed their sheer hooliganism," the Parliamentary Affairs minister said.

He further said the Government was always ready to withdraw the suspension had these 12 MPs apologised, but they were only justifying their actions.

"You must not lose your way while pleasing RaGa (Rahul Gandhi). Do tell him about respect being commanded and not demanded," Mr. Joshi said, pointing at Mr. Ramesh, and added that "’to err is human but to repeatedly justify it is foolish".

Responding to Mr. Joshi’s remarks, Mr. Ramesh in a similar tone said, "You mustn’t lose your way spreading lies to please NaMo (Narendra Modi), who himself is the Jagadguru of Jhoot (master of lies). Repeating what I said in the House—if the Government is accommodative, then the Opposition is responsive." Mr. Ramesh also asserted that the onus is on the Government to ensure that Parliament functions.

Hitting back at Mr. Joshi for releasing the video, which Mr. Ramesh described was not a legal thing to do, the Congress leader questioned the presence of Delhi police personnel in the lobbies that day, as only Rajya Sabha security personnel are allowed to maintain security within the House chambers and lobbies.

He also tweeted the letter of Leader of Opposition had written to Rajya Sabha Chairman M. Venkaiah Naidu on the issue.

12 members of Opposition parties in Rajya Sabha were suspended from the Winter Session on the very first day following a motion brought in by the Government. On the last days of the session, one more MP TMC floor leader Derek O’Brien was also suspended for the session.

The members faced action for alleged unruly conduct towards the end of the Monsoon Session in August when marshals were called after Opposition members stormed the Well of the House during the passage of the General Insurance Business (Nationalisation) Amendment Bill, 2021.

The suspended 12 members comprise six from the Congress, two each from Trinamool Congress and Shiv Sena and one each from CPI and CPM.

Throughout the session, these MPs sat in front of the Mahatma Gandhi statue in the Parliament complex to protest against their suspension.