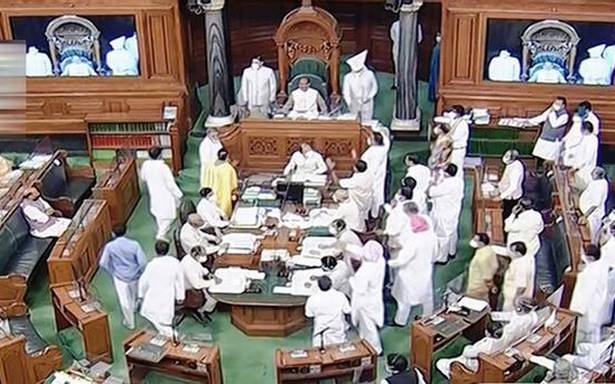 The Lok Sabha on Monday passed three Bills in 20 minutes as disruption by Opposition members over the Pegasus snooping controversy and the farms continued into the last week of the monsoon session of Parliament.

RSP’s N.K. Premachandran had also objected to the manner in which Bills were being passed in the House without a debate. The exact expressions used by the members, however, were later expunged by the Chair.

However, following a meeting of 15 parties, Opposition leaders agreed that they would cooperate in the passage of the Constitution (One Hundred and Twenty-Seventh Amendment) Bill, 2021 that is slated for debate on Tuesday.

The Bill seeks to restore the power of State governments to identify Other Backward Classes (OBC) that are socially and economically backward after the Supreme Court, in a May 2021 order, had empowered only the Centre for such identification.

The amendment has been necessitated after the Supreme Court in its Maratha reservation ruling upheld the 102nd Constitutional Amendment Act that inserted Articles 338B and Article 342A (with two clauses) after Article 342.

Though there were protests right from the beginning of the day’s proceedings started at 11 a.m., at the time of the introduction of the Bill, Opposition MPs briefly stopped sloganeering and returned to their seats, allowing the Minister for Social Justice Virender Kumar as well as the Congress leader Adhir Ranjan Chowdhury to speak on it.

For the first time since the pandemic, Congress president Sonia Gandhi attended Parliament and was seen exchanging greetings with fellow parliamentarians.

When the House met for the day in the morning, Opposition members sought to raise various issues, including the Pegasus spyware controversy and started shouting slogans. Speaker Om Birla first paid tributes to those who had participated in the Quit India Movement and then congratulated the medal winners for India at the just-concluded Olympic games in Tokyo. When the name of Neeraj Chopra, who won the gold medal in the javelin throw at the Olympics, was mentioned, members were seen thumping their desks.