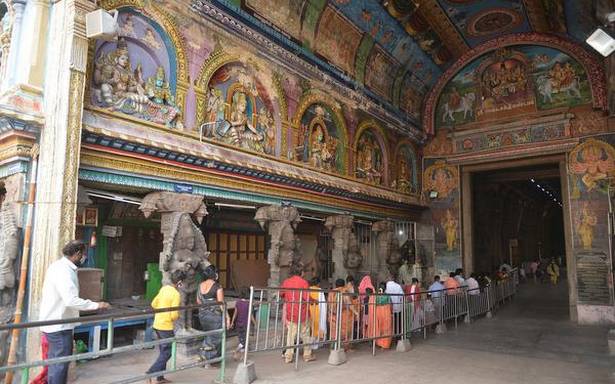 Numerous regulations in place in view of the COVID-19 pandemic

After about a week, Meenakshi Sundareswarar Temple was thrown open to devotees on Monday.

The crowd was thin as Hindu Religious and Charitable Endowment (HR and CE) officials had imposed numerous regulations in view of the COVID-19 pandemic.

With a view to preventing a surge in COVID-19 cases, the State government had recently announced that all places of worship would be closed during important festivals when crowds gather the most, and Fridays to Sundays. Following the strictures, major temples wore a deserted look on Adi Amavasai and other auspicious days last week.

While the big temples were open to the public on Monday, additional armed police personnel have been posted to bolster security.

Meanwhile, Collector S Aneesh Shekar, in a press release, has stated that all temples would remain closed on August 11, Wednesday, on Adi Pooram. The decision was taken after consultations with the temple administration, he said and appealed to the devotees and general public to cooperate with the administration.

The objective of restricting the movement of people was to protect people from the contagious infection through social distancing. While the administration had taken various measures to face challenges that may arise due to the pandemic, people must remain indoors and needlessly go out so that COVID-19 could be controlled to a great extent, the Collector said.

Doctors at Government Rajaji Hospital said that the number of fresh positive cases continued to remain low. Corporation authorities said that the vaccination centres in the city were getting a steady crowd.