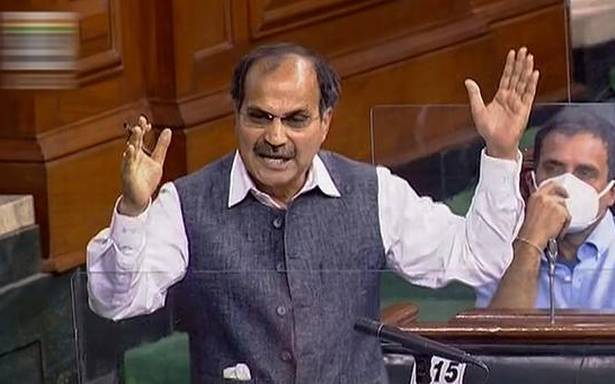 Why are we giving them opportunity to weaken our diplomatic position, it asks

Leader of the Congress legislative party in the Lok Sabha Adhir Ranjan Chowdhary on Wednesday again raised the issue of the controversy arising out of Union Minister and former Army chief General V.K. Singh’s remarks on Sunday that the Indo-China border had not been clearly demarcated, and while China had transgressed across the LAC up to its perception, India had “done the same” possibly more times than China, without the government announcing it. He had raised the issue on Tuesday as well.

“Our forces are facing the Chinese under very tough conditions and with great bravery. Therefore no one, either in the treasury or the Opposition benches, should say anything to jeopardise their position. Our former Army chief and Minister V.K. Singh made some statements that are at odds with our official position. Why are we giving the Chinese the opportunity to weaken our diplomatic position?” he asked when the matter under Rule 377 was put in the House.

He asked whether Defence Minister Rajnath Singh could clarify the correct position and the official line vis-a-vis what General Singh had said.

China’s Foreign Ministry has termed General Singh’s statement as an “unwitting confession”. “The government must clarify in the House what General Singh had said and how this affects our position,” said Mr. Chowdhary.