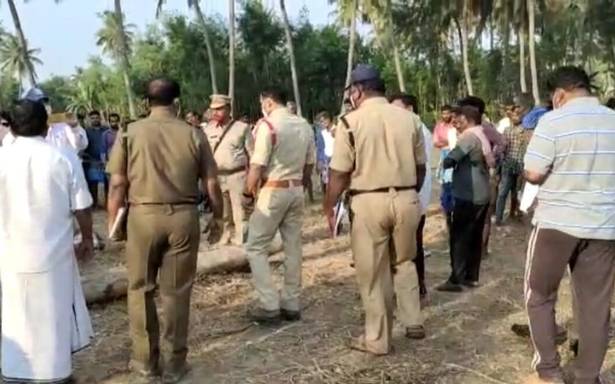 Panic gripped the hamlets close to the Chittoor-Tamil Nadu border after a nine-member herd of wild elephants fatally attacked a 52-year-old farmer at Tanjavur village of Yadamarri mandal (Chittoor district), 25 km from here, on Thursday morning.

According to the villagers, the victim, Valligan (52), a speech and hearing impaired farmer, was reliving himself at the edge of his field abutting a pond around 6.00 am, after finishing his night vigil. Farmers in the neighboring fields were also getting ready to return home, when they spotted a nine-member herd of wild elephants marching towards the forests of Paradarami (TN), after emerging from the pond. In a few seconds, the herd starting running towards Valligan, whose back was facing the jumbos. The farmers made vain shouts to warn Valligan.

Divisional Forest Officer (Chittoor West) who conducted an inquiry with eye-witnesses said that a male tusker leading the herd rushed toward Valligan, and after lifting him in the air had flung him to a distance of twenty feet. The jumbos trailing their leader had trampled him to death, while the panicky villagers ran helter skelter.

“Unfortunately, Valligan, who is speech and hearing impaired, could not escape from the attack despite wild shouting by his colleagues in the field. To make things worse, the deceased was wearing a white shirt when the attack took place. It is a known fact that wild elephants get enraged when they look at any object that is white in color,” the DFO said.

The official said that the nine-member herd had been on prowl across Paradarami-Yadamarri forest belt since a month. “We are more worried as the herd has two babies, which often stray away from the group, forcing the other members to go in search of them, thus crisscrossing the fields abutting the forests. We have deployed additional force of forest watchers and elephant trackers in the region,” Mr Ravi Shankar said.

Meanwhile, senior revenue, police and forest officials inspected the spot, and the victim’s body was shifted to the Government Hospital at Chittoor for autopsy. Puthalapattu MLA M.S. Babu spoke to the family members of Valligan, and arranged an amount of Rs 2 lakh for immediate expenses on behalf of the government. The deceased is survived by wife, two unmarried daughters and a son.