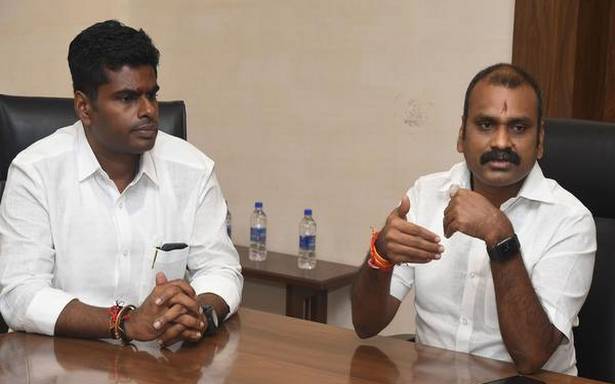 The Union Government is considering increasing the unit cost of deep-sea fishing vessels under the Palk Bay scheme to make it more attractive to fisherfolk, L. Murugan, Union Minister of State for Fisheries, Animal Husbandry, Dairying and Information and Broadcasting, said here on Friday.

In an interaction with senior journalists of The Hindu Group on Friday, the Union Minister, who was accompanied by K. Annamalai, president of the Tamil Nadu unit of the BJP, conceded that the original unit cost of ₹80 lakh was “inadequate” [to meet the requirements of the fisherfolk]. This was why the Union Ministry asked Cochin Shipyard Ltd., a company fully owned by the Union Government, to work out the revised cost.

“They [the Cochin Shipyard] have given their opinion. Now, the unit cost may touch ₹1.3 crore. Once the technical nod comes, we will go ahead,” the Union Minister explained.

He was responding to a question whether the Centre would bring the Palk Bay scheme under the Pradhan Mantri Matsya Sampada Yojana (PMMSY), wherein the unit cost of deep-sea fishing vessels had been fixed at ₹1.2 crore.

Launched by Prime Minister Narendra Modi in July 2017, the Palk Bay scheme, being financed by the Union and the State Governments with beneficiary participation, envisaged the provision of 2,000 vessels in three years to the fishermen of the State and motivate them to abandon bottom trawling. The current year’s Policy Note of Fisheries and Fishermen Welfare Department of the Tamil Nadu government said that 42 deep-sea fishing vessels had been launched with 43 more in various stages of construction.

As for the proposed Marine Fisheries Bill, Mr. Murugan termed the opposition to it “politically motivated”, and said the legislation would not “in any way affect our fishermen in any place”. It had been mooted in the absence of any law to regulate fishing activity taking place beyond 12 nautical miles from the shore. Up to 12 nm, the State laws were in place.

“The new legislation will protect our fishermen if there is any [illegal] activity by a foreign fishing vessel,” Mr. Murugan said.

As for the proposed penalty, he said the fishermen had to register themselves as part of the legislation, as otherwise there would be a fine of ₹1,000. “In fact, State laws in Tamil Nadu and Kerala have higher amounts of fine,” the Union Minister said.

Regarding promotion of seaweed farming, Tamil Nadu would get a special economic park as a pilot project. The foundation stone for the park project was likely to be laid during the third week of November. Fisherwomen would be among the beneficiaries of this programme. The Kisan Credit Card would also be extended to the fisherfolk. Under the PMMSY, five fishing harbours would be modernised as per international standards and the idea was to encourage exports of fish products.

Answering a question on the issues concerning administration of temples by the Hindu Religious and Charitable Endowments Department in Tamil Nadu, the Union Minister urged the State government to implement the directions given by a Bench of the Madras High Court in this regard. He also wanted the government to ensure that income generated from temples be used for proper maintenance of the temples concerned.