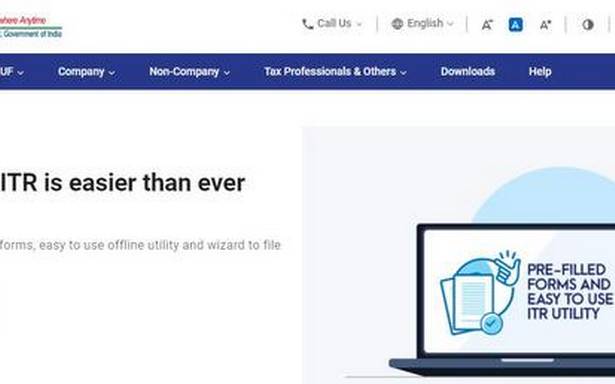 It said presently, about 8-10 lakh people are logging into the new portal every day.

As many as 24,781 responses have been received on the e-proceedings functionality and about 40,000 ITRs are being filed daily on the new I-T portal, the Central Board of Direct Taxes (CBDT) said as it addresses on war footing the technical glitches facing the new site.

In reply to a PTI email on chartered accountants saying that users still experience glitches even a month after the launch of the I-T portal, CBDT said users are reporting some issues related to non-availability of Income Tax Return 3, 5, 6 and 7 and rectification functionality, issues in ITR filing, e-verification or logging in to the portal in certain cases and corrective measures are being taken.

The corrective measures are being taken based on feedback from taxpayers, tax professionals and representatives of ICAI to provide taxpayers with a smooth e-filing experience, it said.

“The Department is continuously engaged with Infosys to expedite the resolution of any pending issues and to make available all balance functionalities at the earliest,” the CBDT, which is the apex body on income tax matters, said.

It said presently, about 8-10 lakh people are logging into the new portal and on an average 40,000 I-T Returns are being filed every day.

“The portal received more than 62 lakh Aadhaar-PAN linkage requests, about 4.87 lakh e-PANs were issued and 1.32 lakh DSC registration have been completed. Thee-proceeding functionality has been deployed for tax payers for faceless assessment and 24,781 responses have been received from taxpayers with 1.42 Lakh attachments till July 10, 2021,” it said.

Several chartered accountants had flagged technical glitches in the functioning of the new income tax portal as certain key utilities like e-proceedings and digital signature certificate are not yet functional, chartered accountants say. Also, some overseas firms have been facing problems to log-in into the portal.

The CBDT in its reply also said that senior officials in the Ministry of Finance are having meetings and feedback sessions with team members from Infosys and external stakeholders such as ICAI on a regular basis.

Concerted efforts are being taken to resolve any pending issues.

“Presently, users are reporting some issues related to non-availability of Income Tax Return 3, 5, 6 and 7 and rectification functionality, issues in ITR filing, e-verification or login to the portal in certain cases or technical issues in filing of certain statutory forms… The Department is also taking corrective measures based on feedback from taxpayers, tax professionals and representatives of ICAI to provide taxpayers with a smooth e-filing experience,” it said.

The CBDT also said many of the initial issues experienced by taxpayers regarding slowness of the portal, non-availability of functionalities or technical issues in functionalities have been mitigated.

The much touted new income tax portal www.incometax.gov.in had a bumpy start from the day of its launch on June 7, as it continued to face tech glitches, which prompted Finance Minister Nirmala Sitharaman to call a meeting on June 22 with the officials of Infosys — who developed the site — to review the issues.

In 2019, Infosys was awarded a contract to develop the next-generation income tax filing system to reduce processing time for returns from 63 days to one day and expedite refunds.