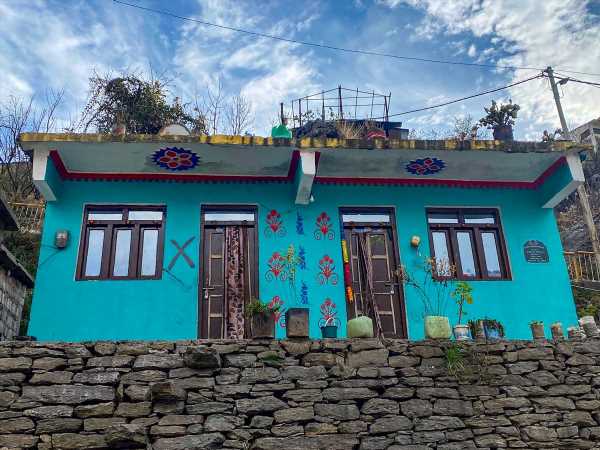 ‘All hydropower projects in the Himalayan region must be stopped.’
‘Joshimath is not alone.’

“The NTPC’s Vishnugad hydel project is the primary cause of what Joshimath is facing at this moment.

“The tunnelling technology which is used across eastern and western Himalayan region brings havoc to the local environment. It is happening in the Teesta project area also.

“The NTPC project must be stopped if we want to save the environment there,” says Dr Anjal Prakash, Research Director at the Bharti Institute of Public Policy at the Indian School of Business, Hyderabad.

Dr Prakash contributes to the Intergovernmental Panel on Climate Change reports and led research on glaciated rivers in the Hindukush Himalayan region in the past.

He has two decades of experience working on water and climate issues and implementation of large-scale and multi-country climate change and developmental projects in South Asia.

In an interview conducted over WhatsApp, Dr Prakash tells Rediff.com‘s Archana Masih why Joshimath is sinking, similar risks faced by other hill towns and the urgent need to stop hydel projects in the entire Himalayan region.

Can you explain what has happened in Joshimath? What are the factors that have caused the town to start sinking?

Jyotirmath or Joshimath is a temple town in the Chamoli district of Uttarakhand. This is one of the four cardinal institutions founded by Adi Shankaracharya — the others being Sringeri in the south, Puri in the east and Dwarka in the west. It is of great religious and spiritual significance because Shankaracharyaji is associated with it.

The Vishnugad Hydroelectric Power project sanctioned a few years ago is constructing a tunnel which is creating havoc on the environment in Joshimath.

In the process of tunnel construction, it has punctured a water stream. Along with this, other geological factors have resulted in water gushing out and flooding the town.

The construction activity of the tunnel has disturbed the local ecology and long existing water regimes — and that is where the problem lies. Cracks have developed in people’s homes — would these have happened now or would they have appeared over a period of time?

Cracks would not have been a sudden phenomenon, but would have started appearing 1-2 weeks before. Some locals have complained about the cracks about a month before.

It may have happened because existing water regimes have been broken into, and ground water streams have been punctured.

The government has appointed a committee that is surveying the area and will give us a better understanding of the situation.

Mixing of the water with the soil results in cracks and causes the city to sink.

Would there have been warning signs to indicate that Joshimath was sinking?

There must have been some warning signs when the National Thermal Power Corporation is constructing the tunnel. They must have informed the local authorities who would have known these warning signs.

A city can’t just be on the brink of sink without any advance signals. What will be the impact of Joshimath’s subsidence?

Joshimath has both religious and strategic significance. The China border is very close, and it is one of the peeths of Adi Shankaracharya.

The impact of Joshimath shrinking will be huge because it will lead to the loss of a town with such historical and strategic importance.

Some reports say the town faces extinction. Is this true or is that an exaggeration?

How can Joshimath be saved? Or is it too late?

Only time will tell if we can save Joshimath. It can be saved if the puncturing of the water regime is not severe, and the issue will subside in a couple of weeks. This area will also receive winter snow and rain which can create havoc with the water gushing out of the ground.

The situation is bleak. It is precarious and appalling that the town is on the verge of sinking and we cannot do much about it. What are the other hill towns that face the same future?

A similar situation exists in Himachal Pradesh, Arunachal Pradesh and Sikkim, in both the eastern and western Himalayan regions.

These are very fragile ecosystems. We should be mindful of whatever activity we take in these areas. They should be coordinated efforts.

Joshimath is not alone, many hill towns may face the same situation.

Do you think the NTPC hydro project and Helang bypass are primary causes that have contributed to the subsidence?

I think the NTPC’s Vishnugad hydel project is the major cause of what Joshimath is facing at this moment. I am not sure of the Helang bypass project because that is better planned.

The tunnelling technology which is used across eastern and western Himalayan region brings havoc to the local environment. It is happening in the Teesta project area also.

The NTPC project must be stopped if we want to save the environment there. What are some of the things we need to stop immediately if we want to preserve our Himalayan heritage?

All the hydropower projects in the entire Himalayan region must be stopped. These projects must be re-evaluated in the light of climate change IPCC reports of down scale data. Many scientific institutions are gathering data which should make its way into the policy-making process.

Policymakers must listen to the science out there.