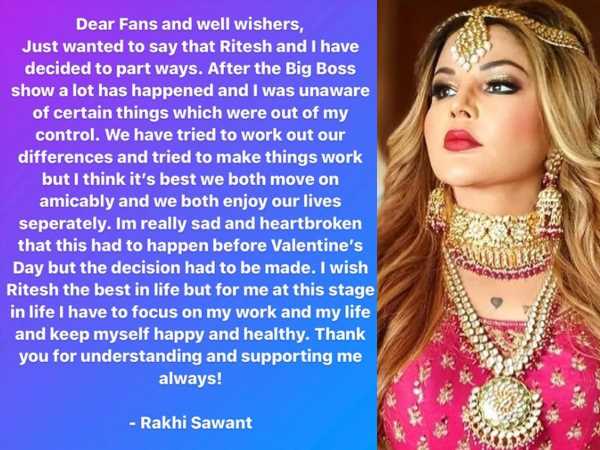 Rakhi Sawant announces separation from husband Ritesh: Rakhi Sawant is a dancer, model, actress and television talk show host, who has appeared in many Hindi and a few Kannada, Marathi, Odia, Telugu and Tamil  movies. She was also  a contestant on the first season of the Indian reality television series Bigg Boss 1 and as a challenger and the  finalist in  the recently concluded Bigg Boss 14. Yesterday the controversial actress Rakhi Swant  officially announced that took to Instagram and announced that she is separating from her husband Ritesh Singh.

Rakhi Sawant  released a statement on her Instagram that read: Dear friends and well wishers just wanted to say that Ritesh and I have decided to part ways. After the  reality show Bigg Boss a lot has happened and I was unaware of certain things which were out of my control. We have tried to work out  the differences and tried to make  the things work but I think it’s best we both move on amicably and we both enjoy our lives separately. I am really sad and heartbroken that this has to happen before Valentine’s Day but the decision has to be made.”

Rakhi Sawant  introduced her husband Ritesh to the world in Bigg Boss 15 who entered the show as a wild card entry.