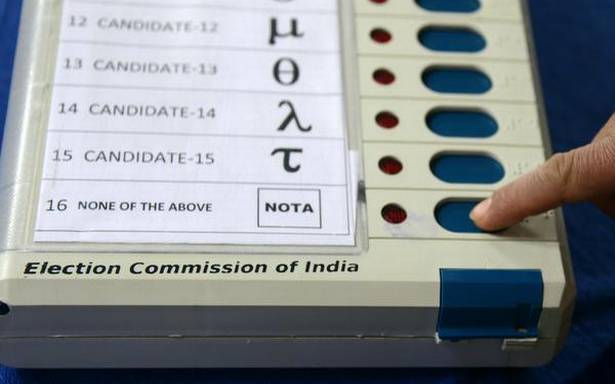 It could play a crucial role in close contests

For the first time, voters in Odisha will have option of not voting for any of the candidates contesting in the urban local body polls. The State Election Commission (SEC) has directed the provision of the NOTA (None of the Above) option to voters for elections to the urban local bodies.

The NOTA option could be exercised by voters in the Assembly and Lok Sabha polls earlier.

Though NOTA may not have any electoral value, it could play a crucial role in deciding the fate of candidates who are often locked in close contests in the urban body polls.

In an order issued on Friday, the SEC stated: “The SEC in exercise of powers vested in it under Article 243 ZA of the Constitution directs that the option NOTA will be provided to the electors for the general elections to urban local bodies.”

However, the Election Commission of India had provided the option of NOTA to voters for elections to the Legislative Assemblies and the Lok Sabha.

In the upcoming urban body polls, electronic voting machines (EVM) will be used.

The announcement for elections to 48 municipalities, 59 Notified Area Councils and three municipal corporations is likely to be made soon.

State Election Commissioner Aditya Prasad Padhi said reservation of seats and delimitation had been completed by January 31. The SEC has already held discussions with representatives of all parties.