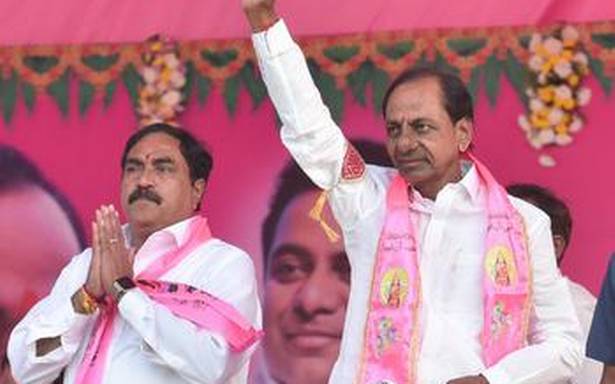 Chief Minister K. Chandrasekhar Rao has stated that the State would transform into “Bangaru Telangana” only with equitable distribution of development in all corners and is not restricted to only a few areas.

Speaking after inaugurating the Integrated District Office Complex that also houses District Collectorate at Jangaon on Friday he hoped that it would become an enviable growth centre sooner than later as part of the Hyderabad-Warangal corridor. Apart from Hyderabad, Telangana would have 32 other growth centres in the years to come and the reorganisation of district was taken up not as a routine administrative exercise but as well thought of plan with vision of growth.

Recollecting that there used to be complaints of employees unwilling to work in remote, border and forest areas such as Jukkal, Narayankhed, Asifabad, Mulugu, Bhupalapally, Gadwal and others, the Chief Minister told Chief Secretary Somesh Kumar, who was present on the dais, to give special allowance to employees working in remote and forest areas, if need be.

“I don’t mind giving special allowance to employees working in remote areas so that it acts as encouragement to work in such areas and helps spur development by implementing government decisions and schemes properly”, the Chief Minister said. He also suggested that the authorities simplify the service rules of employees so that they could get promotions on due date and ensure that they get all due benefits on the day of retirement itself.

Reiterating that Telangana was a wealthy State, Mr. Chandrasekhar Rao asked people not to mind the comments of some “mindless persons” and said that the per capita income of the State was set to reach ₹2.7 lakh in the statistics to be revealed in the next few weeks from the present ₹2.3 lakh. “Nobody had even an inkling about such growth in Telangana when we were part of combined AP, but we have been able to give water (irrigation) to every corner and bring a change,” he said. Jangaon was one of the severe drought-prone areas when in combined AP, KCR said, adding situation had changed completely with Godavari water reaching most of the areas in the district. Jangaon now boasts of a Collectorate, when many States don’t have Secretariat even of such size.The Integrated District Offices Complex has been constructed on 25 acres land with a cost of ₹58.2 crore. It has three floors housing 34 departments (district offices) with proper greenery, conference hall and other facilities.