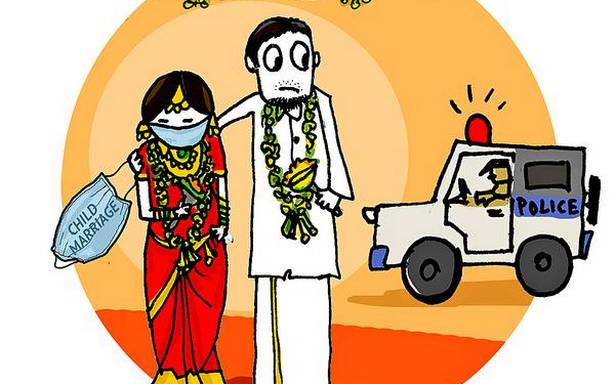 Odisha has witnessed a sharp increase in the number of child marriages prevented over the past four years following increased awareness and better coordination among field-level staff.

As against 657 child marriages stopped in 2019, 1,108 were stopped in 2020. In the first five months in the current year, attempts to solemnize 726 such marriages have been foiled.

In 2017, 324 child marriages were stopped following the last-minute intervention from community, NGOs and field-level officials. In 2018, the number grew marginally to 411. However, the last two years saw a massive jump in the marriages being stopped.

Fifteen districts including many southern districts have higher percentages than the State average. There are eight districts where the practice is higher than the national average.

“Still one in five women was married by the age of 18 in Odisha. On the other hand, one in 10 men were reported to have been married before 21 years indicating that early marriages among girls are twice compared to that of boys,” says the strategy paper which seeks to bring down child marriages by 50% by 2024 and eliminate the tradition by 2030.

As per the government strategy paper prepared with the help of UNICEF and UNFPA, poverty is one of the main reasons cited in western Odisha districts for families to opt for child marriage.

Girls from poor households are more likely to marry as children, since marriage becomes a ‘solution’ to reduce the size of the family. The cost of marriage, however, slides families further into poverty, it says.

Ganjam and Rayagada districts which have high levels of migration among young boys in search of jobs cited possible love-marriages, inter-State and inter-caste marriages as major reasons for early weddings.

“A special effort was made to prevent child marriages two years ago with the Women and Child Development Department, UNICEF and ActionAid, an NGO, joining hands. District coordinators have been placed in 15 vulnerable districts. They worked towards strengthening response mechanism for the prevention of child marriages,” said Ghasiram Panda of ActionAid.

Mr. Panda said, “There has been perceptible improvement in responding to information about child marriages. The district administration in association with the NGOs has been swiftly moving to stop them.”