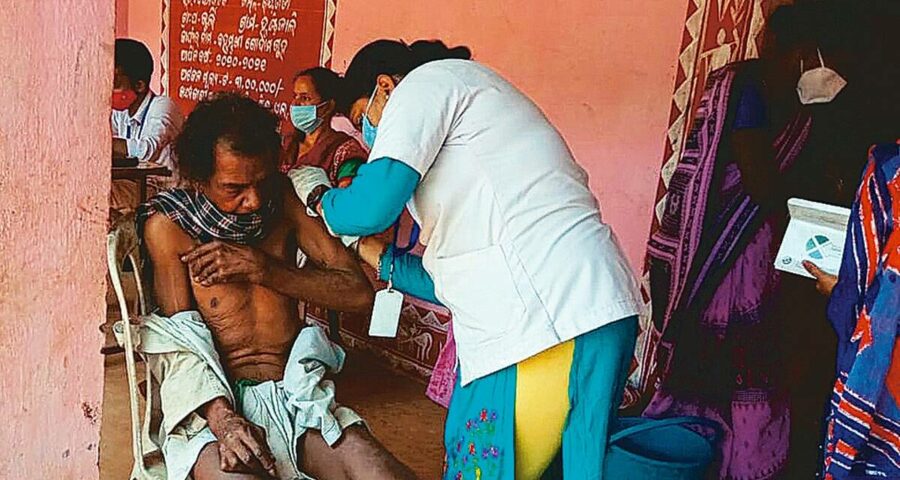 It’s not an easy trek — at least five of the 23 villages in the panchayat are completely inaccessible — but what is tougher is what awaits her: a fear of the vaccine among villagers, belonging to Dongria Kondh, a Particularly Vulnerable Tribal Group (PVTG). Every Wednesday, for the last three weeks, Ranjita Sabar, 26, a vaccination health worker, has been walking over 10 km to reach remote villages in Kurli gram panchayat, in Odisha’s Rayagada district. It’s not an easy trek — at least five of the 23 villages in the panchayat are completely inaccessible — but what is tougher is what awaits her: a fear of the vaccine among villagers, belonging to Dongria Kondh, a Particularly Vulnerable Tribal Group (PVTG).

In early May, as Covid cases began to rise in Rayagada district, the administration had set up a vaccination centre in Kurli. However, at the end of three days, only eight people showed up. Since then, there has been progress, even if slow — so far, 40.86 per cent of 1,160 people in the 45+ age group in Kurli have got their vaccines.

“People feared that they would die after vaccination. So we got local leaders to vaccinate. That helped boost confidence of the others. Soon after, we started a door-to-door vaccination,” says Sabar.

Last Wednesday, she trekked 7 km uphill to Hundizali, carrying boxes of vaccines. It took them close to four hours on foot to reach the village. By the end of the day, the team managed to give Covaxin doses to 52 of the village’s 62 members above 45 years. Bira Jensika, 48, who is among those who got the vaccine in Hundizali, says, “We heard about the virus from our village leaders and news on TV. But nobody here fell sick last year. This year, a lot of people got fever. We have our herbs to treat fever and cold, but we have been told that the situation is different this time. After our leaders got vaccinated, we felt safer.” Jensika’s wife too got the vaccine, but his two children, aged 22 and 18, are yet to be vaccinated.

The gram panchayat has a community health centre with a doctor and a pharmacist. The nearest Covid-hospital with oxygen support is 40 km away from Hundizali.

Jyotsana Maharana, Public Health Extension Officer of Bhismacuttack Block, says, “Anyone who shows symptoms informs our health workers, who travel to the village and tend to them. If the patient’s condition is not stable, we bring them to our health centre. Luckily, during the second wave, no one had severe symptoms.”

Thirteen of the 62 tribal groups in Odisha are classified as PVTGs, entitling them to special protection because of their dwindling numbers.

The 2.9 lakh PVTG tribals are spread across 11 districts of the state. So far, 153 of them have tested positive for Covid, of whom 92 have recovered. No deaths have been reported.