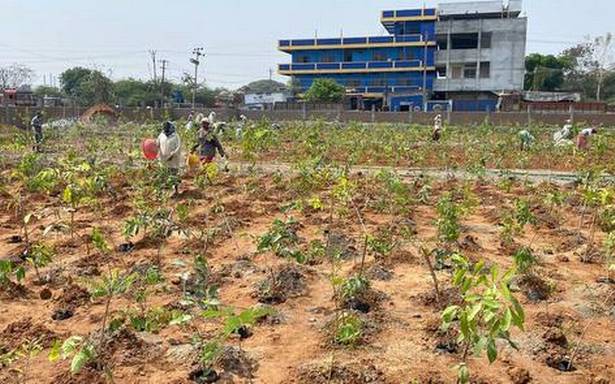 The first two phases of the urban forest blocks have over 14,000 plantation of different species planted in the Miyawaki method in the oxidation pond area of the NTPC power plant there with the help of Telangana State Forest Development Corporation Ltd.

The public sector energy utility now plans to have one more urban park, this time in the Ganganagar Park of the Ramagundam Municipal Corporation.

NTPC-Ramagundam officials stated that they have plans to plant over 8,000 saplings in the third phase of the urban forest block development there by planting 54 tree species.

“Our work began with clearing the jungle that has grown in Ganganagar Park. Filled with ash and bushes, the area specified by the urban forest block has been cleared of ash and bushes first to make it suitable for plantation and later filled with red soil”, NTPC official Sahadev Sethi said.

The NTPC officials are of the view that “at a time when people, particularly the COVID-19 patients, are struggling to get the required medical oxygen supplies, the availability of clean air to the rest of the population is also getting increasingly scarce, particularly in the urban areas. The urban forest blocks in the Miyawaki method provide a good solution to citizens in the urban areas as they act as lung spaces with fresh air”.

To be developed in association with TSFDCL, the area identified for the third phase of urban forest block in the Miyawaki method has been secured with a boundary wall already and the plantation area has been divided into eight sectors. Each sector-wise bed has been dug up for 0.60 metres depth and filled with layers of paddy husk, farmyard manure, cocopeat and jeevamrutham.