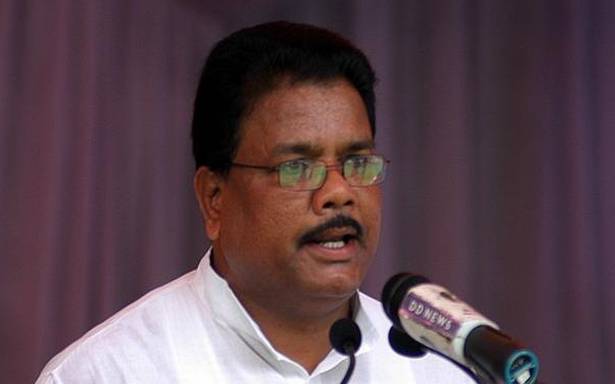 Mr. Bora also said that “winds of change” were blowing in Assam and expressed confidence that the Congress, along with its allies will win over 101 out of the 126 Assembly seats in the polls.

Slamming the BJP for its criticism of his party’s alliance with the AIUDF for the upcoming state polls, Congress’ Assam unit chief Ripun Bora on Monday said there was nothing wrong in aligning with the Badruddin Ajmal-led outfit as it was not communal and cannot be regarded as an “untouchable”.

Mr. Bora also said that “winds of change” were blowing in Assam and expressed confidence that the Congress, along with its allies — the All India United Democratic Front (AIUDF), the CPI, the CPI(M), the CPI(ML) and the Anchalik Gana Morcha — will win over 101 out of the 126 Assembly seats in the polls likely in March-April.

In an interview with PTI, Mr. Bora said it was not the Congress’ convention to announce a chief ministerial face in advance and the party will decide on who will be the chief minister only after elections.

The Assam Pradesh Congress Committee (APCC) chief lashed out at the BJP for attacking the Congress over its alliance with the AIUDF, saying that while the BJP had in the past aligned with the PDP in Jammu and Kashmir, it was questioning the Congress’ tie-up with the Ajmal-led party.

In Assam, the BJP is sharing power with the AIUDF in at least three Zila Parishad districts, Mr. Bora argued.

“What is the harm in aligning with the AIUDF, they are not unconstitutional, they are not untouchable. How can you say they are communal. If you respect your own religion, you are not communal. The BJP is communal,” he alleged.

The BJP is focused on communalisation, but for the people of Assam, the main issue is to save the state because of the way the BJP and the RSS have attacked the identity, culture and heritage of Assam by the Citizenship (Amendment) Act (CAA), Mr. Bora said.

The CAA is going to destroy the entire social fabric of Assam, it will divide the people and create communal disturbance as well as conflict between different castes, communities and religions in the state, he alleged, adding that the CAA will not serve any purpose for the people.

“The CAA will bring threat to the language and to the existence of the culture of the people of Assam. Therefore, even though the BJP has declared that after elections they are going to implement the CAA, but we in the Congress have said that after the election if our Congress party comes to power, we will not allow the implementation of the CAA in Assam,” Mr. Bora said.

On Sunday at a rally here, Congress leader Rahul Gandhi had also said his party will protect every principle of the Assam Accord and will not let the CAA be implemented if voted to power in the upcoming assembly polls.

Mr. Bora also hit out at the BJP over the issue of the National Register of Citizens (NRC) for Assam, saying it has been a long standing demand of Assam but the BJP has stopped the NRC after final publication.

The Congress’ stand is clear that the NRC, the final list which has come out with 3.11 crore people of Assam, should be accepted, Mr. Bora said.

“Secondly, side by side we have said that 19 lakh names which are not there, all of them are not foreigners, most of them are Indians, we have demanded that those people as per the rule of NRC should be given an opportunity of appealing before court so that they can prove themselves as Indian citizens,” he said.

Asked when the seat sharing arrangement between the Congress and its allies will be finalised, Mr. Bora said he cannot share the details of internal deliberations but it will be sealed soon.

Some small disputes and differences are there which will be sorted out, he said.

Mr. Bora also said the alliance will “very soon” come out with an appeal to the people elaborating the issues for which the six parties have come on a common platform, adding that the CPI(M) has some reservations about calling it a ‘common minimum programme’.

Asked if a chief ministerial face will be announced, Mr. Bora said the Congress convention is that it does not project a CM.

“It is a party of internal democracy. So the party will decide who will be chief minister only after elections, that is the democratic way. It is not only the case with Assam but in other states also the party has followed this,” he asserted.

On the Congress’ chances in the upcoming Assembly polls, he said the “winds of change are blowing” in the state and there is a “tremendous undercurrent” in favour of the Congress and its allies.

“People are scared of coming out openly (against the BJP) as they are being threatened and blackmailed that if you go with the Congress you will not get benefits,” he alleged.

Accusing the BJP of making false promises, Mr. Bora said the people of Assam are feeling a “sense of betrayal”, realising that the ruling party has only been making “false promises”.

The six party-alliance will not just get a clear majority but is confident of getting 101 plus seats, Mr. Bora said.

The APCC has announced that it will contest the forthcoming state polls in alliance with five parties the AIUDF, the CPI, the CPI(M), the CPI(ML) and the Anchalik Gana Morcha to oust the ruling BJP from power.