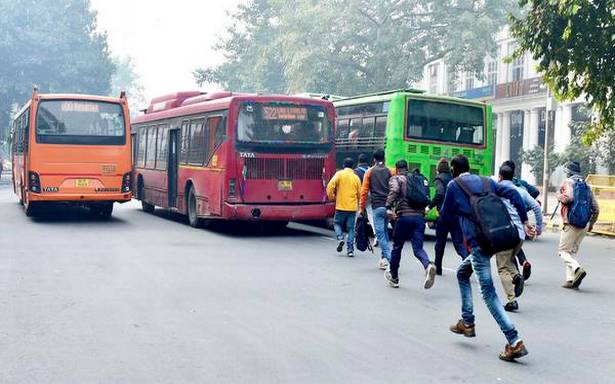 As Delhi is in ‘yellow’ alert due to rising Covid cases, metro trains and buses are running with 50% of seating capacity

A group of people blocked the MB Road and damaged DTC buses on Thursday morning after not being allowed to board a vehicle which had exceeded the permissible passenger carrying capacity set when Delhi is in ‘yellow’ alert due to rising Covid cases.

Police used mild force to disperse the crowd and five people have been detained, officials said.

Additional Deputy Commissioner of Police (south) M. Harsha Vardhan said some people blocked the MB Road and broke the glass of a DTC bus on Thursday around 10:30 a.m.

"Police dispersed the crowd. A case under relevant sections is being registered at Sangam Vihar police station and five people have been detained. It was due to non-availability of seats in the buses due to Covid-related restrictions,” he said.

In videos of the incident that have emerged on social media, it was seen that a green and a red air-conditioned bus have been damaged. Windshields and side mirrors were broken.

The conductor of a bus, in a video, said, "We have instructions to allow only 17 commuters at a time. When there are 20 people, including the driver, conductor and marshal, on the bus, we do not stop it. If we stop and more people enter the bus, we will be fined ₹2,000." "When we did not stop the bus today, people got agitated and started pelting of stones. However, nobody inside the bus was injured," he said.

Amid a spike in COVID-19 cases following the emergence of the Omicron variant, Delhi Chief Minister Arvind Kejriwal on Tuesday declared a ‘yellow alert’ closing schools, colleges, cinemas and gyms.

Shops dealing in non-essential items will open on an odd-even basis, and metro trains and buses will run with 50% of seating capacity in the city.

Under the four-stage Graded response Action Plan (GRAP), the ‘yellow’ alert will kick in if the positivity rate settles at 0.5% for two consecutive days, leading to a host of restrictions.

GRAP was approved by the Delhi Disaster Management Authority in July in anticipation of a third wave of Covid. It aims to bring in a clearer picture of imposition and lifting of restrictions depending on the Covid situation.