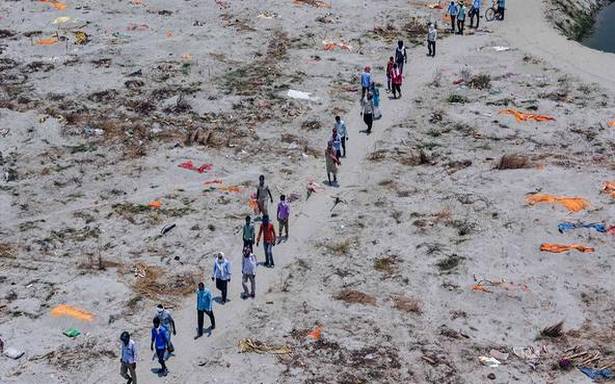 Rejects plea for proper disposal by U.P. govt. of bodies buried along the Ganga

The Allahabad High Court on Friday dismissed a petition seeking directions to the Uttar Pradesh government to perform last rites, cremate or dispose the bodies found near river Ganga, saying “If there is a death in a family, is it the responsibility of the State?”

The petitioner, Pravnesh, a lawyer from Prayagraj, had pleaded with the court for directions to the State government and officials in Prayagraj to perform the cremation according to religious rites and dispose the bodies buried at different ghats in Prayagraj as early as possible.

The petition also sought directions to the government to prevent or stop the burial of bodies near the river.

A division bench of Chief Justice Sanjay Yadav and Justice Prakash Padia said it was of the view that the petitioner “has not done much research work” in respect of rites and customs which are prevalent among various communities living along the bank of river Ganga.

“Therefore, we are not inclined at this stage to cause any indulgence, instead to allow the petitioner to withdraw the petition with a liberty to file fresh petition after causing inquiry and research in respect of the practice of last rites in various communities which are residing along the bank of Ganga,” the court said.