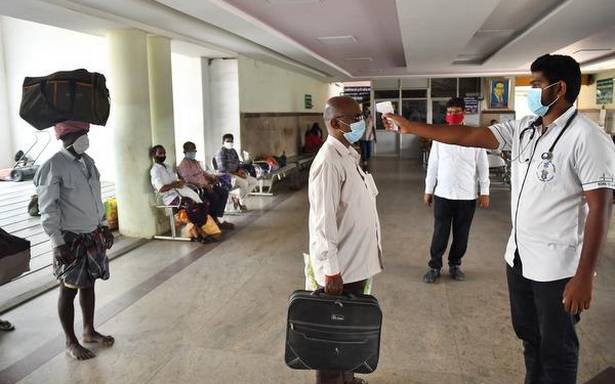 Officials from Salem Railway Division said that all COVID- 19 safety protocols were being followed at railway stations under the division and advised the public not to believe fake messages on crowding at railway junctions.

A. Gautam Srinivas, Salem Division Railway Manager, told presspersons that fake messages and videos on crowding at railway stations were creating panic among the public. He said videos from the lockdown period last year had been shared as if these were current instances. Mr. Srinivas said there was no crowding and that all the existing train services would continue, sufficient seats/berths were available. There was good patronage for the services and additional trains would be provided if required.

Mr. Srinivas said all COVID-19 protocols were being followed on trains and at spots where the public gathered on station premises. People were being advised to wear masks and maintain physical distancing on platforms. Station premises were being disinfected regularly.

According to officials, special teams had been deployed at major stations to check the temperature of passengers. COVID-19 awareness campaigns are being held at railway stations.

Mr. Srinivas said frontline and healthcare workers had been vaccinated, and vaccination for staff aged above 45 was being intensified.

Coaches that were earlier converted into isolation areas for COVID-19 patients were ready to be used for this purpose again, if required.