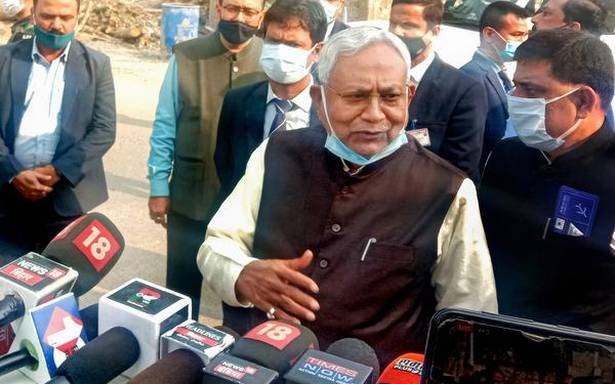 Bihar Chief Minister Nitish Kumar on Friday refused to comment on Prime Minister Narendra Modi’s announcement repealing the three farm laws as the Prime Minister himself has spoken elaborately on the issue. Mr. Kumar, a BJP ally, has consistently supported the controversial farm laws, saying they were in the interest of farmers.

However, Jharkhand Chief Minister Hemant Soren demanded the resignation of Union Agriculture Minister Narendra Tomar and compensation of ₹5 crore to the kin of farmers who died during the protest.

“The farms laws were brought in by the Central government. It was the Central government’s decision. Now the Prime Minister has announced to withdraw the laws in the coming session of Parliament. The Prime Minister has elaborately said all on this with clarity, so there is no need to say anything on this,” Mr. Kumar said in Patna, speaking to the media at the airport.

When asked if the farm laws were repealed in view of the coming Assembly elections in Uttar Pradesh, Mr. Kumar added, “Everyone says what they think proper… everyone has right to speak but the Prime Minister has put out everything clearly.”

Meanwhile, Opposition leader in the State Assembly, Tejashwi Yadav said the BJP government at the Centre was compelled to “repeal the farm laws out of fear of losing the upcoming Assembly elections in Uttar Pradesh, Punjab and Uttarakhand”.

“Opposing the farm laws, we had hit the streets in Bihar soon after the State Assembly poll but the anti-farmer Nitish-BJP government had slapped cases against me and our party workers for supporting the farmers,” tweeted Tejashwi Yadav.

“Opposition has every right to say what they think,” the Chief Minister responded.

Demanding the resignation of the Union Agriculture Minister, Jharkhand Chief Minister said, “The Prime Minister should provide ₹5 crore compensation to the kin of each of those who died during protests and also to give them the status of a martyr. The FIRs lodged against them and the cases pending in the court too should be withdrawn immediately,”

In another tweet, Mr. Soren said, “the farmers who were on the roads with children while leaving their homes [should] be given ₹10 lakh each as compensation for their crop.”