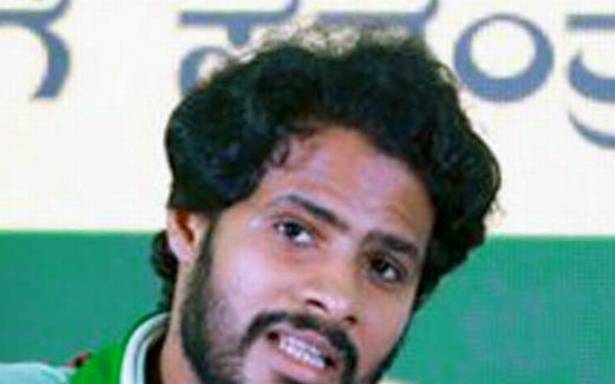 Kumaraswamy says no decision on candidate so far, but hints at the party’s plan

With the Bharatiya Janata Party trying to establish its base in the district that often witnesses bloody fights between the Janata Dal (Secular) and Congress workers, the battle between the two leaders could define the course of the Assembly poll outcome. Mr. Kumaraswamy, his wife Anitha Kumaraswamy and Mr. Shivakumar are elected from Ramanagaram district. The recent public spat between Higher Education Minister C.N. Ashwath Narayan and Bengaluru Rural MP D.K. Suresh in front of Chief Minister Basavaraj Bommai in Ramanagaram could be an indicator of the things to come.

Mr. Kumaraswamy told The Hindu recently: “D.K. Shivakumar and D.K. Suresh duo is out to finish us. Their agenda for 2023 is to remove me from Ramanagaram. They are strategising to that effect. We need a strong candidate, which we do not have among the local leaders now.” He acknowledged that the coalition dented the party’s strength in Ramanagaram, which could be countered only with a strong candidate.

Though publicly, the decades old bitter rivalry seems to have been buried by families of the former Prime Minister H.D. Deve Gowda and Mr. Shivakumar, the battle to control the Ramanagaram turf has remained intense.

“We have not decided on the candidature. But if circumstances arise, Mr. Nikhil will contest. The party does not have a strong leader who has the capability to contest the polls effectively,” he said. “If we have to put up a good candidate, then we will ask Mr. Nikhil to contest. The local leaders do not have strength and they are asking either me or Mr. Nikhil to contest. However, I cannot contest from Ramanagaram since I represent Channapatna. “The family has always been ready to make sacrifices to protect the party, and if need be Mr. Nikhil will contest in Ramanagaram,” Mr. Kumaraswamy added.

While the recently concluded JD(S) conclave indicated that Mr. Nikhil would get a larger State-wide role to attract youth, there has been speculation around the political career of Mr. Nikhil, who lost his debut electoral battle in Mandya against Independent candidate Sumalatha Ambareesh during the 2019 general elections.

The Ramanagaram seat has been a stronghold of the Janata Dal (Secular) since the 90s, and has returned Mr. Gowda and Mr. Kumaraswamy. Mr. Gowda represented the constituency in 1994 when he became the Chief Minister while Mr. Kumaraswamy has represented Ramanagaram thrice. Even during the 2018 polls, Mr. Kumaraswamy won the seat, but vacated it to retain the neighbouring Channapatna. Ms. Anitha, a former legislator from Madhugiri, won the bypoll later.

Party sources said that Ms. Anitha Kumaraswamy, who currently represents Ramanagaram, has indicated her unwillingness to be on the political space. Sources also believe that there have been attempts by the Congress to weaken JD(S) after the failed 14-month JD(S)-Congress coalition headed by Mr. Kumaraswamy. “The JD(S)’s strength in a few pockets has also gone down. We are also not sure how the situation will pan out for Mr. Nikhil since he is the fourth person from the family to contest from Ramanagaram.”