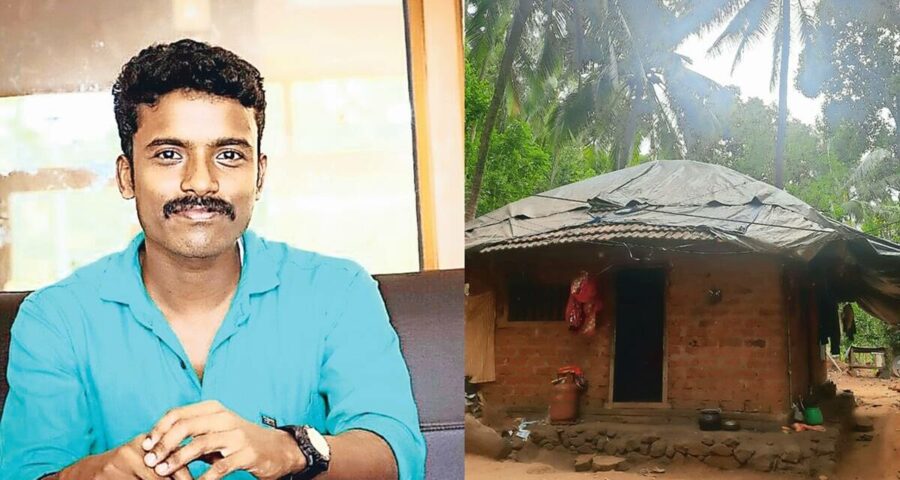 Selected as an assistant professor at IIM-Ranchi last Monday, Ranjith Ramachandran, 28, has traversed a long, amazing journey of hardship and endurance in life. On Saturday, he shared on social media the picture of his un-plastered hut at his village — Panathur in Kasaragod district — and wrote: “an IIM assistant professor is born in this house.’

Ranjith, who has been working as an assistant professor at Christ University, Bengaluru, for the last two months, said: “I wanted my life to inspire youths who are struggling to find success—my success should inspire other people’s dreams. At one time, after higher secondary school, I had thought of dropping higher education plan and finding a small-time job to support the family.”

Ranjith’s father, A Raveendran, is a tailor and mother, Baby, an MGNREGS worker. The couple has three children, Ranjith being the eldest. The family lives in a small hut with leaky tiled roof covered with polyethylene sheet. It has roughly 400 square feet area, with a kitchen and two cramped rooms for the five-member family.

He belongs to a Scheduled Tribe (Marathi-speaking community) category in Kerala’s Kasaragod district, but Ranjith said he had never required reservation in his academic life.

Recalling college days in Kasaragod, he said: “After higher secondary I longed for a job to help me support my parents financially. I had to support my younger brother and sister, both students then. I got the job of a night watchman at a local BSNL telephone exchange for Rs 4,000 a month. I joined a degree course (Economics) at Pious Xth College, Rajapuram, near my village. During day I went to college and in evenings returned to the telephone exchange, where I spent the entire night.

“For five years, during my degree and postgraduate days, I lived at the telephone exchange. As a security guard, my main concern was to ensure uninterrupted power supply.”

Ranjith, who did his post-graduation from Central University, Kasaragod, said: “From college, I went home only to eat, and was soon back at the exchange on guard duty. I had converted the exchange into my study room as well as living room.”

After university came IIT-Madras. “I had no social capital to fall back on in my life at the village, where no one is bothered about higher studies. When I landed in IIT, I could not even speak English…. I had never moved out of Kasaragod. In fact, at one time, I wanted to quit the PhD programme,’’ recalled Ranjith, who was awarded PhD in Economics a year ago.

But a professor couple at IIT-Madras – Dr Subash Sasidhaaran and Vaidehi – came to his help, he said. “Prof Subash, who was my guide, encouraged and convinced me that my decision to quit the course would be wrong. I decided to fight against the odds and nurtured a dream to become a faculty at IIM.”

At IIT-Madras, Ranjith said he not only survived on stipend but also saved a portion of it to send home, where sister Ranjitha and brother Rahul were pursuing professional courses.

Now, Ranjith said, all he wants is to be a good teacher at IIM. “I have to join IIM-Ranchi within the next 90 days. Before that I would have to wind up my career at Christ University, Bengaluru,’’ he said.