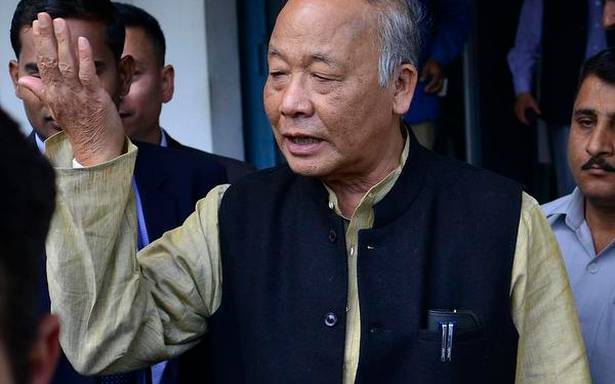 With knives out for Manipur Chief Minister N. Biren Singh within the BJP and severe anti-incumbency against his government, Congress, the lead Opposition party in the State, has reason to cheer, except the party is still dragging its feet into the Assembly election with a reluctant leadership at the helm.

The Congress in the State is still synonymous with 73-year-old Okrom Ibobi Singh, Manipur’s three-term Chief Minister, who is both the party’s strength and weakness. With the Enforcement Directorate pursuing money laundering cases against Mr. Ibobi and family, according to the party leaders he is missing in action. “One can’t fight the battle without a general. And in our case, the general is yet to open the attack on the BJP. In fact, he is yet to step out of his house,” a senior party functionary said. Even in his own home district of Thoubal, he is not heard or seen. On health grounds, he is holding out on meeting the people. Though, the party is hoping that once the election dates are announced, Mr. Ibobi and others will go full throttle.

The party is down to 15 MLAs from its tally of 28 in 2017, thanks to multiple waves of exodus. This includes rebel K. Joykishan who has been in the departure lounge for a long time. The final nail was driven in August last year, when six-time Congress MLA and party’s State president Govinddas Konthoujam quit to join the BJP. Congress insiders claim that the party has regrouped since then with N. Loken Singh, a four-time MLA, as the State president. “Despite the 15-year rule, the Congress has no organisation or committed cadres. When the MLAs left the party, they left with their supporters hollowing out the party,” another Congress leader added.

Limping into the poll ring for the Congress Mr. Ibobi still remains the best bet. Party’s vice-president Devabrata Khumanthem Singh told The Hindu, “It is but natural that the leader of the Congress Legislative Party will lead the battle into the Assembly election. If we do get a favourable mandate, the decision on the Chief Ministerial candidate will once again fall on the legislative party.”

And it is still banking on nostalgia for Mr. Ibobi’s three terms as Chief Minister to pave its way for a return. “The Congress is fighting on the basis of its 15-year track record of achievement between 2002-2017 and on the strength of its manifesto to bring Manipur on the path of peace, progress and prosperity,” party’s senior observer for the poll Jairam Ramesh said.