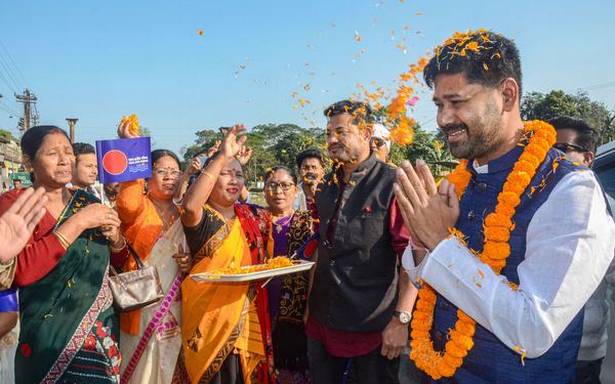 Congress keen on bringing Assam Jatiya Parishad on board; BJP wary of challenge in areas dominated by indigenous communities

Major political parties in Assam are wary of the challenge posed by a new regional entity, particularly in eastern Assam, dominated by indigenous communities.

The Congress, keen on wresting power from the BJP and its regional allies, has been wooing the Assam Jatiya Parishad (AJP) as well as jailed peasants’ rights activist Akhil Gogoi’s party, Raijor Dal (RD). The focus is more on AJP, considered a stronger force than the RD.

“We want all the regional forces to unit and maintain a distance from the national parties,” AJP president Lurinjyoti Gogoi said, indicating that his party was inching closer to a pre-poll alliance with RD.

Both the Congress and the BJP-led alliances have targeted at least 100 of the 126 seats in the Assam Assembly with elections to be held by May. But they are wary of the AJP and RD denting their performance in about 45 seats across eastern Assam.

The BJP has downplayed the perceived threat from either the AJP or RD or any alliance they might cobble up. “They are no factors at all,” senior BJP leader Pawan Sharma said.

But the AJP, in particular, is believed to have consolidated enough support to pose a challenge to the Asom Gana Parishad (AGP), the larger of the two regional allies of the BJP.

The AGP and AJP were born, 35 years apart, from the same sub-nationalist groups avowedly against “illegal immigrants” and cater to the same sets of voters. The AGP has been on overdrive for almost two months to not let slip its support base.

“We have been connecting with our voters and our feedback is that we can maintain our position or do better,” AGP president Atul Bora said.