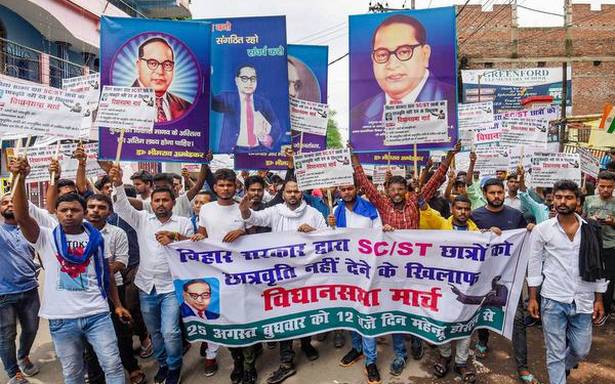 The Bihar government on Friday launched a new portal to resume post-Matriculation scholarships in the Scheduled Castes and Scheduled Tribes category to meritorious students. Earlier, this Centrally-sponsored scheme was executed through the National Scholarship Portal 2.0. Due to a technical glitch in the portal, the State government had not received any application under the scheme for past three years, denying students the opportunity to take advantage of the scholarships.

SC/ST Welfare Minister Santosh Kumar Suman, too, was present on the occasion. Deputy Chief Minister Renu Devi connected virtually. The portal has also been simplified for the convenience of deserving students, the Minister said.

The scheme is funded by both the Centre (75%) and State (25%). It was run by the State SC/ST Department until 2017-18 but was subsequently transferred to the State Education Department. Earlier, it was said that the Bihar government had not received any application under the scheme for the scholarship due to some “technical glitch in the National Scholarship portal” for past three years.

“With the new portal, students from 2019-20 [batch onward] will get scholarship benefit,” said an official of the Education Department.

Scheduled Castes make up 16% of Bihar’s total population; Scheduled Tribes are just 1%. SC/ST students with parents’ annual income of less than ₹2.5 lakh can apply for the scholarship. Over 5 lakh SC/ST students in the State are expected to be eligible under the scheme.

Earlier, a Public Interest Litigation was filed on the issue in the Patna High Court by petitioner Rajiv Kumar and the court had subsequently directed the Bihar government to submit a report. Taking note of the issue, the Bihar Chief Minister on August 10 directed the State Education Department to resume the scheme “as soon as possible”.

“Within 20 days, we launched the new portal a new, easy format for the students’ convenience,” the Education Department official said.