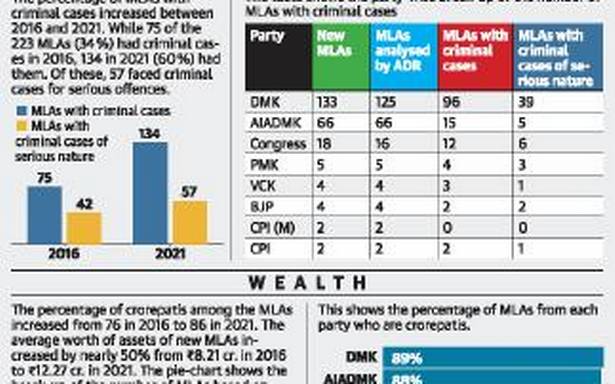 The average worth of the assets of Members of the Legislative Assembly and the percentage of legislators with criminal cases went up in 2021 when compared to 2016, an analysis by the Association for Democratic Reforms, released on Wednesday, showed.

According to the analysis, while 34% of the elected MLAs were facing criminal cases in 2016, it increased to 60% in 2021. In absolute numbers, at least 134 MLAs elected in 2021 faced criminal cases, of whom 57 had criminal cases for offences of a serious nature.

ADR’s analysis included only 224 of the 234 MLAs. Details of eight MLAs from the DMK and two from the Congress were not included in the analysis due to lack of availability of proper data, the organisation said.

This election also saw a marginally higher number of graduates entering the Assembly, compared to 2016. Around 65% of the elected candidates were aged 60 or above, the analysis showed.