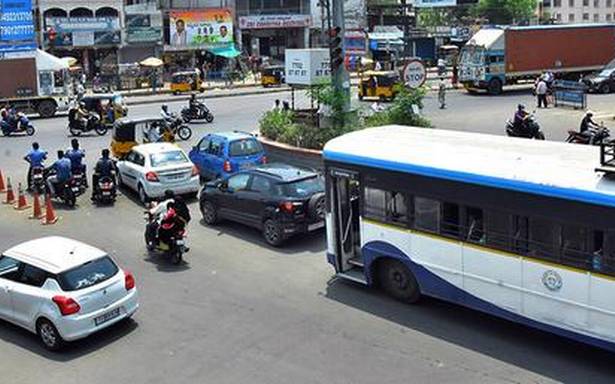 Despite being a busy road, everytime the focus is more on widening the Mumbai National Highway 65 instead of constructing a flyover, which would address the problem on a permanent basis. Neither the officials nor political representatives are responding to the requirement.

For instance, Pothireddypalle chowrasta is the entry point to Sangareddy district headquarters. The vehicles that come from Hyderabad take a right turn to enter the district headquarters while the vehicles going to Mumbai go straight. But all the vehicles have to stop here to make way for each other. A flyover with underpass will solve the problem. However, a flyover was built a 500 metres away from the chowrasta where little purpose is served.

Kandi chowrasta in the newly formed mandal headquarters town also faces a similar problem. This town comes 5 km before Pothireddypalle. Here the straight route goes to Mumbai while a left turn connects to Bangaluru Highway via Shankarpally in Ranga Reddy district. The road contract from Patancheru to Sangareddy was awarded to Progressive Constructions Limited during the tenure of the Congress government and later a dispute arose over poor maintenance of the road and toll collection was stopped. Meanwhile, the Outer Ring Road (ORR) has also become operational. Progressive Constructions approached the arbitrator demanding compensation, stating it had lost hugely due to stopping of toll collection as well as the ORR. “In the past also, a flyover was proposed at Pothireddypalle but shifted to another place. Flyover here is an immediate requirement,” said a police official on condition of anonymity.

“We need flyovers at Isnapur, Muttangi, Kandi and Sangareddy. The decision has to be taken at Delhi level and we are ready to move the proposal. For that matter, anyone – maybe district officials, Collector, NHAI authorities and Lok Sabha members can make the proposal,” said Superintendent of Police S. Chandrasekhar Reddy.

“The issue was raised twice in Parliament and was taken to Minister for Surface Transport Nitin Gadkari’s notice. The flyover work could not be taken up due to technical reasons. I want to make a fresh proposal again for flyovers at Pothireddypalle, Kandi and BHEL crossroads,” Lok Sabha member K. Prabhakar Reddy told The Hindu.