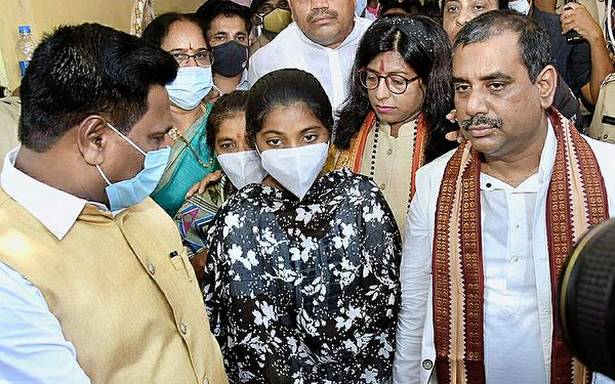 Efforts of police lauded in tracking the accused

The National Commission for Scheduled Castes (NCSC) Vice-Chairman Arun Halder has lauded the efforts of the Andhra Pradesh State Government in arresting the accused in a very short time and filing charges under SC & ST (Prevention of Atrocities) Act in the murder of engineering student in Guntur district.

The NCSC team visited Guntur and conducted an investigation into the circumstances that led to the death of Nallapu Ramya on August 15.

Earlier, the team was received by Principal Secretary, Social Welfare, Kantilal Dande, District Collector Vivek Yadav, SP Guntur Urban K Arif Hafeez and SP, Guntur Rural, Vishal Gunni. The officials briefed them about the action taken so far. The victim’s family was paid a compensation of ₹10 lakh, 50% of compensation under SC & ST (Prevention of Atrocities) Act, promise of a job and a house site.

Speaking to mediapersons at the Secretariat, Mr. Halder said his team was satisfied with the steps taken by the State government in responding positively and providing compensation to the family of the victim in a short duration.

He praised the efforts of Guntur district police in tracking and arresting the accused within a day of the offence and said the commission would recommend them for awards. Mr. Halder said the State government had set an example by reacting promptly to the incident.

The commission had received more than 100 complaints from various organisations and individuals and assured that it would look into each one of them and take appropriate action.