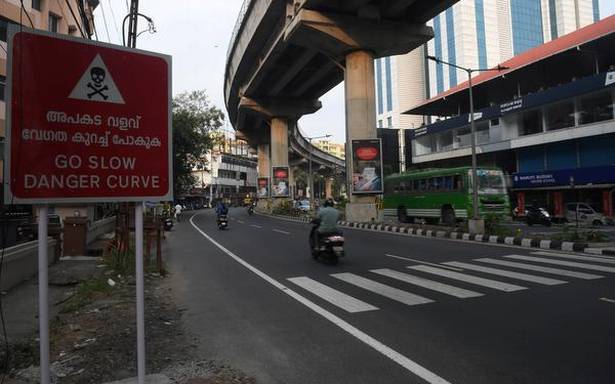 The National Transportation Planning and Research Centre (NATPAC) has suggested a road-safety audit of the entire metro corridor, taking into account accidents on roads beneath the 25-km metro viaduct, especially at curves and U-turns. Dozens of U-turns are unscientifically located and must either be sealed or relocated, official sources said.

The development comes in the wake of experts from NATPAC and Kerala Road Safety Authority (KRSA) inspecting the accident-prone curve at Elamkulam on SA Road on March 5 and readying a draft report on what has become the most accident-prone black spot in Kochi. Ten youths — mostly two-wheeler riders — died there in accidents in the past six months.

The draft report, which has been submitted by the probe team to the NATPAC Director says that erroneous road engineering and tendency of motorists to overspeed were the reasons behind the accidents. Two-wheeler riders died after their vehicles either skidded off the edge of the road and hit the median or after they lost control of their vehicles, on either side of the curve.

A multi-storey building protruding into the road on the southern side of the curve has resulted in considerable narrowing of the road width. Similarly, a ‘blind spot’ at the exit from a star-rated hotel on the northern side hampers visibility of vehicles that approach the curve from the Kadavanthra side, the sources said.

The NATPAC Director is expected to take a call on the draft report, before forwarding it to the KRSA and City Traffic Police. As per Indian Roads Congress standards, U-turns must not be located close to one another and must be clearly visible to oncoming motorists.

Following the preliminary report of NATPAC, a detailed study of the curve will be taken up, to ascertain the design and design speed of the road.

NATPAC has suggested a speed limit of 40 kmph at the curve for now. Boards specifying it must be placed on either side. It has also recommended rumble strips, in addition to cat’s eye reflectors.

The sources said that the KRSA had recently approved a study of such black spots in the city. Accident data has been collected, and a detailed analysis will be done in the coming two months. The KRSA will suggest remedial measures that NATPAC will implement.