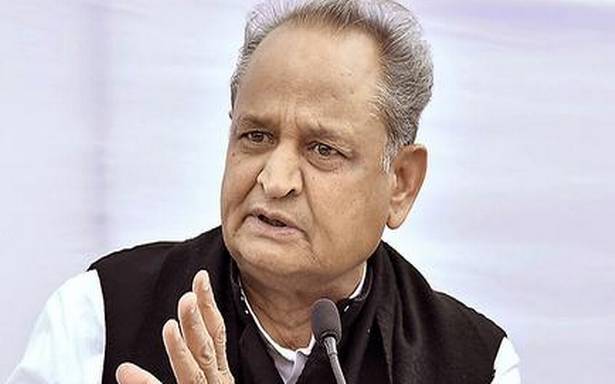 The Congress government in Rajasthan has again sought the national project status for the proposed Eastern Rajasthan Canal Project (ERCP) during the pandemic, while affirming that it would transfer excess waters from the Chambal river basin to 13 districts facing water scarcity. The State has also formulated a contingency plan for supply of drinking water during summer.

Chief Minister Ashok Gehlot has instructed officials to take up the issue with the Centre and make “sustained efforts” for an early start of the construction. The ambitious project with an estimated budget of ₹40,000 crore will be a major initiative for interlinking of rivers in the State.

The Central Water Commission has already given in-principle approval to the feasibility report, while the Union Ministry of Jal Shakti had finalised a Cabinet note on it as an intra-basin water transfer scheme in 2018. The mega project will also provide water for irrigation to an additional 2 lakh hectares.

Mr. Gehlot said the national project status would facilitate solution to the water scarcity issue in eastern and south-eastern districts at least till 2051 by linking Parvati, Kalisindh and Chambal rivers. It will also supply water to the Delhi-Mumbai Industrial Corridor.

Presiding over a review meeting on the drinking water arrangements, Mr. Gehlot said the work on Isarda, Navnera and Parwan dams as well as other important water supply projects would be expedited. The relining and maintenance of the Indira Gandhi Canal, launched in neighbouring Punjab, would benefit the northern districts, he said.

The State government has taken up transport of water tanks, construction of new water sources and replacement of pipelines and pump sets as part of drinking water management in both rural and urban areas during the pandemic. The meeting was informed that ₹220 crore had been sanctioned for these works.