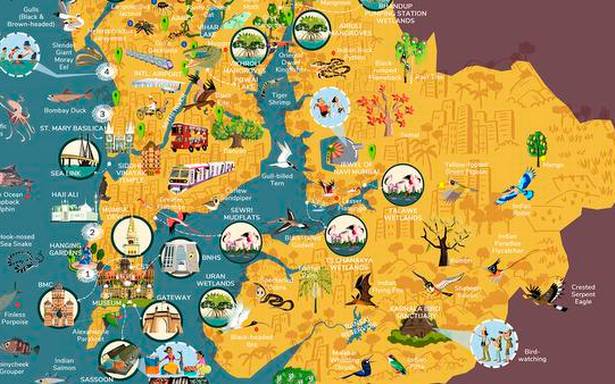 After launching the city’s first static biodiversity map last year, Ministry of Mumbai’s Magic (MMM) has come up with a new interactive map which documents different species with clickable features that present details of the species, their habitats, and their conservation status.

MMM is a platform to unite citizens and showcase their collective action, mobilising them to draw the attention of the local government to prioritise protection of Mumbai’s biodiversity hotspots, green spaces, and their inhabitants.

The interactive map covers the Mumbai Metropolitan Region and the water bodies of Thane creek, Mahim Bay, Vasai Creek and the Arabian Sea. Highlighting 17 species of flora and 78 species of fauna, the map also works to emphasise the interdependence of the indigenous communities — Adivasis and Kolis — and the local biodiversity.

The map intends to act as an educational tool for Mumbaikars to learn about the rich biodiversity and also throw the spotlight on the flora and fauna, green spaces and the indigenous communities of Mumbai.

“The interactive version of the map also showcases local organisations who have been working to conserve the biodiversity,” Arpita Bhagat, MMM campaign head, said.

According to Suma Balaram, MMM’s creative lead, the map has been built in such a way that any organisation or person can embed it on their website and share it with the world.

Rohan Chakravarty, who illustrated the map, said making the map interactive increased the scope of this project as young audience who used internet could be reached. “This is a resource that is available at a click. It is otherwise very difficult to obtain because if you have to look up the biodiversity of Mumbai, it is a very vast topic in itself and there is so much information dispersed far and wide on the internet that it would take time to collate all that data,” he said.