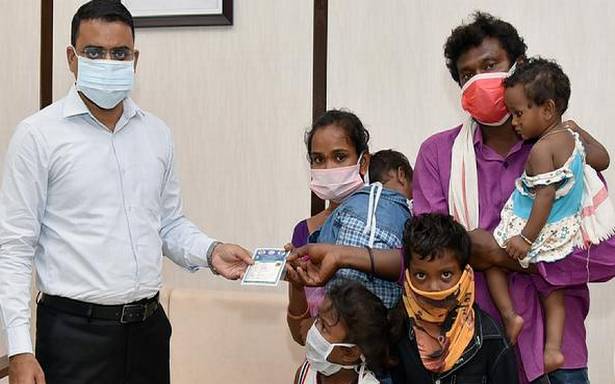 He also gets contract job as a sanitary worker in Guntur

A disturbing image of a rag-picker living along a major drain moved District Collector Vivek Yadav, who promptly ensured that the family is provided with an Aadhaar Card and Rice Card within three days.

This will give the family access to all welfare schemes of the Central and State governments.

The image of a man picking up used plastic bottles along a major drain published in a newspaper caught the attention of Mr. Yadav, who directed the Joint Collector, Aasara, K. Sridhar Reddy to identify the man.

The man was identified as Routhu Nagaraju, living at Sugali Colony in AT Agraharam. An illiterate, he had no idea how to register for the Aadhaar Card and the Rice Card.

The personnel at the 52nd ward secretariat got him registered for getting a new Aadhaar Card and later for a Rice Card.

The Rice Card was given to him the next day and he was provided the job of a sanitary worker on contract basis in the Guntur Municipal Corporation. Later, the staff at the secretariat applied for a house site for him.

On Thursday, the family met Mr. Yadav and thanked him for the help. Mr. Yadav suggested that their children be admitted to an anganwadi school.

The Collector also appreciated the personnel of the 52nd ward secretariat for taking prompt action and ensuring that the family had access to Aadhaar and Rice Cards within days.

“We feel happy that the welfare steps taken by the State government are being provided at our doorstep,’’ said Mr. Nagaraju.