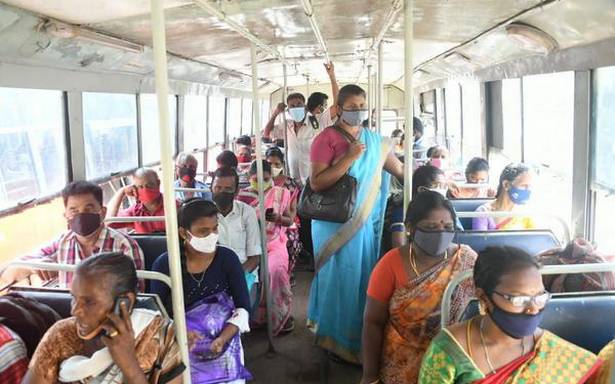 A total of 1,792 buses are being operated; based on patronage, operations may be increased, TN Transport Minister said

After many weeks, the Metropolitan Transport Corporation (MTC) resumed operations of its bus services in Chennai on Monday, after the State government announced several relaxations during the ongoing COVID-19 lockdown.

Transport Minister R.S. Rajakannappan, who inspected the central bus depot on Pallavan Salai along with senior transport officials on Monday morning, said that MTC was operating more than 50% of the fleet of 1,792 buses. The Villupuram State Transport Corporation would be operating 750 buses to cater to the residents of the three districts including Kancheepuram, Chengalpattu and Tiruvallur, where MTC buses are not available. Based on the patronage, bus operations would be increased in the coming days, he added.

Mr. Rajakannappan, giving a break-up of the various types of MTC buses being operated, said of the 1,792 buses being operated on Monday, 925 comprised ordinary buses (free travel for women and transpersons), 807 deluxe buses, 30 express and 30 small buses. He said though 50% occupancy has only been allowed as per the Standard Operating Procedures (SOPs) the Transport Department, to help the public travel, was utilising 50% of the fleet.

A senior official of the MTC said though more than 1,792 buses were being operated covering all routes, most of the bus stops had little crowds and the occupancy was also not up to 50% in several buses.

The MTC is also taking all COVID-19 preventive measures of disinfecting buses, and allowing only those commuters wearing masks to board.

The MTC, using the lockdown, has also taken steps to vaccinate more than 85% of the bus crew of drivers and conductors.