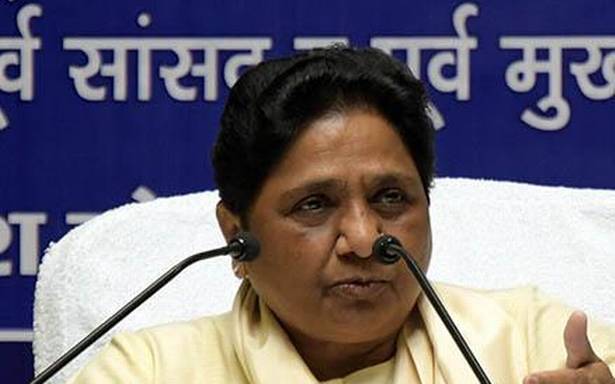 Bahujan Samaj Party (BSP) chief Mayawati on August 29 demanded action against those who thrashed a 40-year-old tribal man and dragged him on the road after tying him to a vehicle resulting in his death in Madhya Pradesh’s Neemuch district.

The incident took place on August 26 and the tribal, identified as Kanhaiyalal Bheel, died during treatment at a hospital on August 27.

In a tweet in Hindi, the BSP supremo said, “The tribal Kanhaiyalal Bheel was beaten over a trivial issue in Neemuch district of Madhya Pradesh. He was dragged after being tied to a vehicle and died subsequently. This incident of mob lynching is highly condemnable. The BSP demands that the government must punish the guilty persons".

The Madhya Pradesh Police had on August 28 said five accused were arrested in the case.

"Chhitar Mal Gurjar, a milkman, was riding a motorcycle which knocked down the victim Kanhaiyalal Bheel of Banda village when he was standing on the Neemuch-Singoli road, some 84 km from the Neemuch district headquarter," Superintendent of Police Suraj Kumar Verma told reporters.

He said Mr. Gurjar lost his cool after the milk spilt on the road due to the accident and beat up Mr. Bheel.

Mr. Gurjar then called up his friends who also roughed up Mr. Bheel and tied him to the rear side of a vehicle passing by with a rope. Mr. Bheel was dragged for some distance, Mr. Verma said.

All the eight accused were charged with sections 302 (Punishment for murder) and other sections of the Indian Penal Code and the SC/ST (prevention of atrocities) Act, he said.

The five persons, identified as Chhitarmal Gurjar (32), Mahendra Gurjar and Gopal Gurjar (both 40), Lokesh Balai (21), and Laxman Gurjar have been arrested and efforts are on to trace others, the SP said.